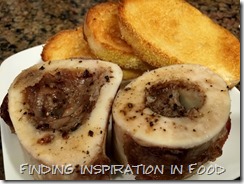 I have tried bone marrow on several occasions and always thought it was some exotic ingredient that was hard to find. Turns out our local Kroger had it and it was super cheap! I bought a few packages and plan on trying a few versions of this. Usually the marrow is accompanied by sever other toppings like something pickled, etc. Having it straight on toast was really rich tasting, so I could see where having a pickled ingredient in addition tones it down. Non the less it’s totally worth trying so check out your meat section at your local store!

Preheat the oven to 425 degrees.

Clean the marrow bones. Some people like to soak the bones to extract the blood but I haven’t had issues with roasting them as-is.

Sprinkle salt and pepper on both of the cut sides of the bones. Top with some dried parsley and roast for about 20 minutes or until the marrow middles break down into a glistening gelatin. 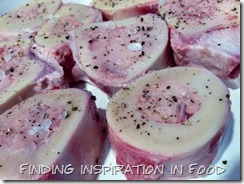 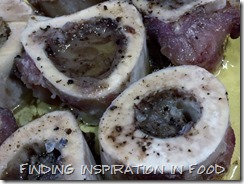 Serve with a nice, crusty bread au naturale or slice a baguette into crostinis. Use a marrow spoon or just any small spoon to dig out the gelatinous bits and spread them on the bread for a heavenly bite.

You could also whip up a lemon-dressed parsley salad, the traditional accompaniment for roasted bone marrow. For further decadence, serve a bone (or two) alongside a succulent steak! 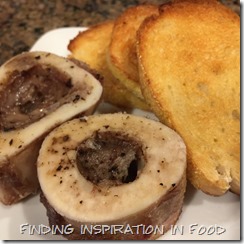