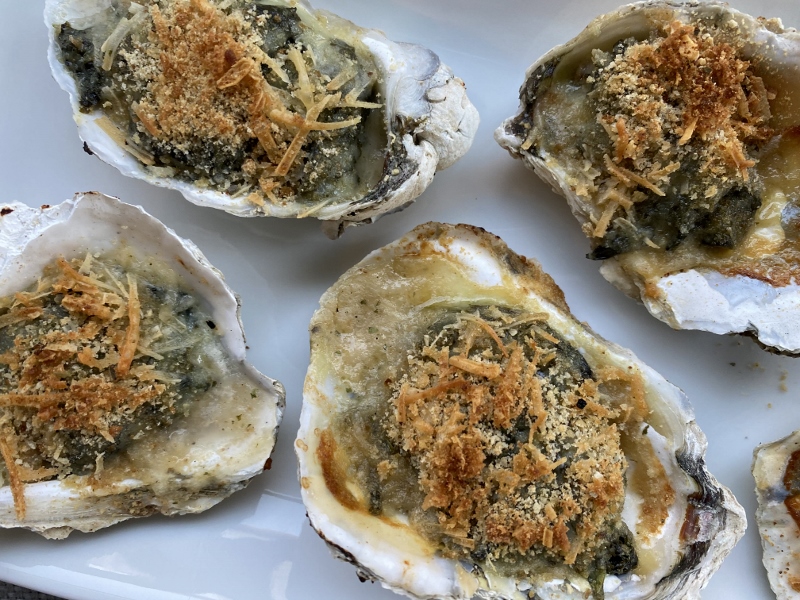 I usually can’t get my husband to eat raw oysters, but he will eat them when they are covered in yummy goodness and hide the texture lol. I thought this recipe was good, however I think it is better cooked on the grill rather than the oven to give it that extra elevated taste. This topping was a labor of love for how quickly you eat it, but it did taste really good.

Most people are afraid of shucking oysters. I honestly don’t mind it if you know what you are doing and watch a couple videos on tricks they open up pretty quick and easy. You could also buy the preshucked oysters that come in a tub. I’ve seen them at HEB in the seafood section near the seafood dips and crab cakes. You could put some in a small ramekin and top with the Rockefeller sauce and get the same effect with less work.

Preheat the oven to 350 degrees. Place milk, onion and bay leaf in a medium saucepan. Bring to a boil over medium heat.

Spoon sauce on top of oysters and set in an ovenproof pan filled with rock salt. Preheat the oven to 350 degrees. Top oysters with bread crumbs-Parmesan mixture. Bake until golden brown.

Note: Clarified butter is unsalted butter that has been slowly melted, evaporating most of the water and separating the milk solid from the golden liquid on the surface. Skim off and discard the milky residue before using.