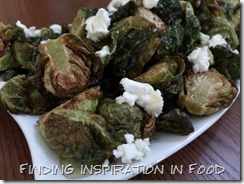 We love trying out new Brussels sprouts recipes. This one is really good. The crispy version is way better then steamed in my opinion. You can’t go wrong with goat cheese and with the drizzle of honey is rounds out the dish with a little sweetness. It really is to die for! I did mine in a deep dryer to make it easier, but the recipe below is done in a pan.

½ cup canola oil (or more depending on the size of your pot).

Start by slicing up some Brussels sprouts. You’ll want to use larger sprouts for this recipe, preferably ones that have some stalk left on them to hold all the leaves together while frying. I opted to slice the Brussels from a stalk since my grocery store only had tiny ones in the bag.

After I sliced the Brussels from the stalk, I sliced them in half and left the little stalk part intact.

Meanwhile, I added the canola oil to a medium saucepan over medium-high heat. It was about 1” deep. (I used a deep fryer)

After about 1-3 minutes, I tested the oil to see if it was hot by slowing dipping a Brussels sprout into the oil. Once it sizzles, you’ll know it’s ready. At this point, I dropped the heat to medium and got my splatter screen ready.

Once the oil is hot, slowly add about half of the sprouts. Use tongs to make sure they distribute evenly and flip them once they’re golden on one side. 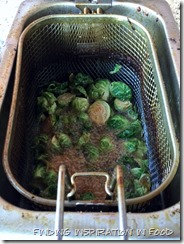 When the Brussels are completely golden (about 4 minutes), use the tongs to remove them to a paper towel lined plate. 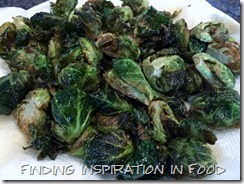 Repeat with the second batch.

Once the second batch is complete, salt the sprouts evenly and plate them.

Before serving, add a drizzle of honey and a crumble of goat cheese.

Serve immediately for an appetizer or a side dish. 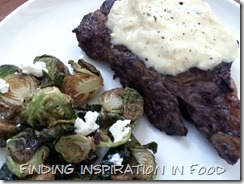 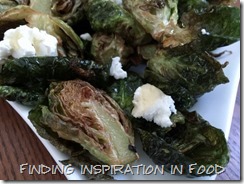