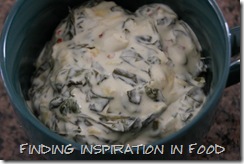 One of my favorite dips has to be spinach artichoke dip! It has to been done right too, I’ve had some really bad ones in my time. This recipe by far is the best I’ve come across. Since I’ve had a lot of request for it I thought I would share it. I don’t have step by step pictures, but I’ll update that next time I make a batch. I like to make big batches of this and freeze it in smaller containers.

Just because it’s a dip doesn’t mean you can’t use it for other things. I used it to stuff French bread at the last BBQ Cook-off. I added cooked crawfish tails to it, spread it on bread then topped with Mozzarella cheese. Set it on the grill to toast the bread a little, melt the cheese on top and absorb the smoke a little and it’s delish! Another easy dish I use it in is topping fried chicken breast with the dip. I top that with Mozzarella cheese and dinner is served! (This time I cheated to make it easier and used chicken nuggets.) 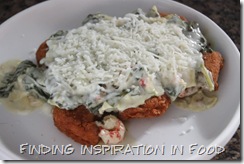 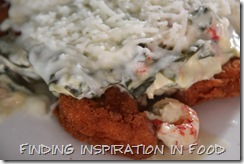 Be creative and think outside the box!

Bring the cream to a simmer over medium heat and add the Monterey Jack, cream cheese, garlic powder, Worcestershire, salt and fresh pepper. Continuously stir to prevent sticking until the cheeses melt.

While slowly stirring, add the spinach, artichoke hearts, and scallions. Stir until mixed and the spinach is wilted.

This dip can be served immediately or served chilled. 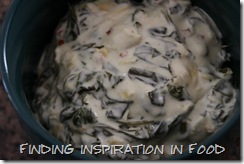