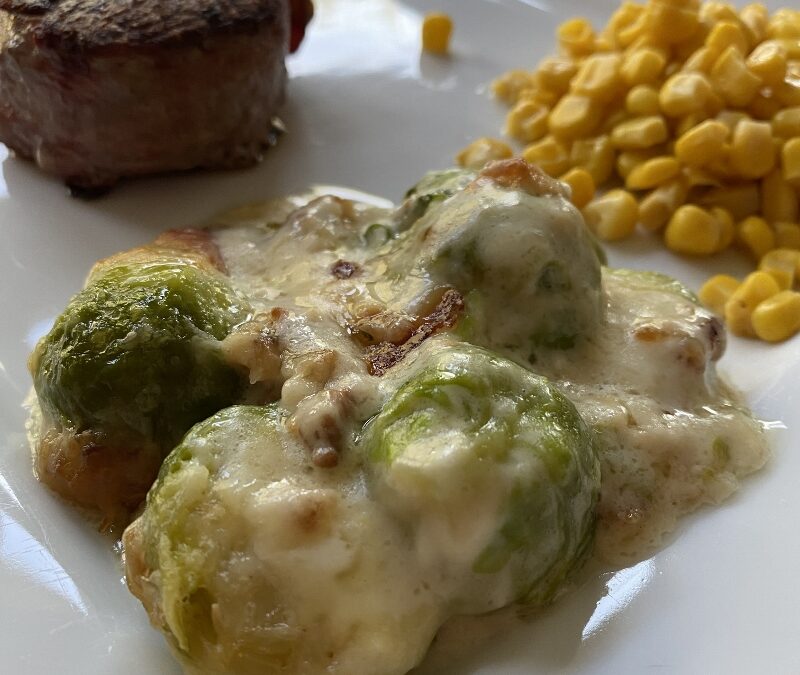 Cook the bacon in a small skillet or saute pan until crispy. Drain on a paper towel-lined plate. Set aside.

Prepare an ice bath. Bring a large saucepan of generously salted water (at least 2 tablespoons) to a boil.

Carefully drop the Brussels sprouts in and cook for 2-3 minutes or until almost cooked through. (You should be able to easily pierce with a knife but still feel some resistance in the center.) Drain and transfer to the ice bath to cool.

Pour the heavy cream into the saucepan and whisk in the all-purpose flour. Bring to a simmer over medium-low heat.

Add the cubed brie cheese and whisk until the cheese has melted and the sauce is smooth. Add salt and white pepper to taste.

Drain the Brussels sprouts and pat dry on paper towels or a clean kitchen towel. Transfer to the prepared baking dish.

Scatter the cooked bacon over the Brussels sprouts.

Pour the cheese sauce over the Brussels sprouts and bacon.

Combine the butter, breadcrumbs and Parmesan cheese in a small bowl. Mix with your hands until the butter is mixed in and evenly distributed.

Scatter over the top of the Brussels sprouts.

Bake for 20-25 minutes or until bubbly. Cover with aluminum foil if necessary at about the 15-20 minute mark if breadcrumbs are getting too brown. Serve immediately.