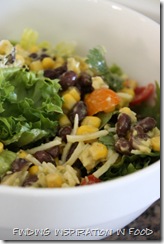 I hope you had a nice long relaxing weekend! I nursed a sick hubby most of the weekend, but I did get to meet the Houston Texans quarterback TJ Yates. Isn’t he a cutie? 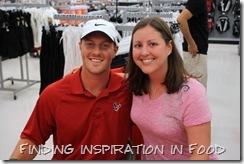 I was amazed at how shy he was of course he’s only 25 and fairly a new guy to the team, but I thought it was really nice that he wasn’t such a show off. He took time with each of the kids in line and talked to them and encouraged them to stick with what they where working at. I hadn’t been to an athletic signing before, but I have to say it’s so much faster and the lines aren’t as long as the cookbook authors I’ve met. Oh well, it was all for my father in law who’s a huge fan of the Texans so I hope he enjoys his father’s day gift!
Ok now on to some food! My parents brought we a bunch of home grown tomatoes not long ago so I wanted to find a recipe that you could actually taste them in and this was a good one. I added a little more cheese just because I like cheese, but it tasted really good. 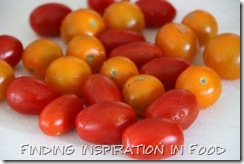 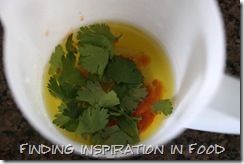 In a large serving bowl, add the lettuce, avocado, corn, beans, tomatoes, and cheese. Add the dressing and toss well. Season with salt and pepper, to taste, and serve. 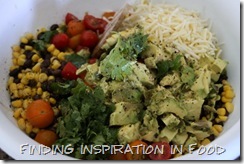 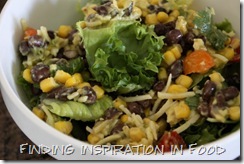 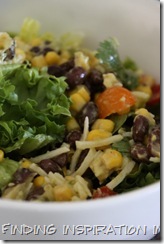