Get Inspired for Valentine’s Day 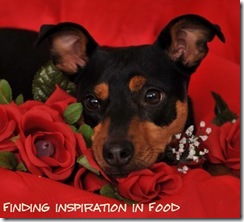 Isn’t my baby the cutest? If you’re a new reader let me introduce you to my baby Mocha (not much of a baby anymore she’s 3). I entered her in a Covers for Charity contest and she was picked to be on the cover of the February issue of Cats and Dogs Magazine, then they had a page issue problem and she’s got to go back in to have new pictures taken for a different month. Since it’s Valentine’s I thought I would share one of the pictures they took. This was at the end of her photo shoot where she just laid down and was tired. I love it and it’s my new favorite picture of her.

If your sweetie isn’t much of a sweets eater like my hubby is then don’t panic there’s plenty of ways to show your love through food. In Martha Stewart’s February issue she shows off several heart shaped foods that are super easy to make using a cookie cutter. I was originally going to make the crab ravioli in the issue because it’s so easy, but I’ve had to move out of my house for a renovation issue. Instead I’m giving you some inspiration to create breakfast, lunch, dinner or dessert heart shaped meals. Even making a pizza in a heart shape would be cute! So break out those heart shaped pans, molds and cookie cutter and make your day extra lovey-dovey!!

(Photo and inspiration from Martha Stewart)

French toast
Freeze the bread for about 15 minutes before cutting.

Gelatin
Make it extra firm (use 1 1/2 times gelatin called for in a homemade recipe), and cut after it sets; rinse cutter with warm water between cuts.

Carrots
Slice into 1/4-inch rounds while raw, then cut out hearts. Add to soup, and simmer until tender.

Ravioli
Use wonton wrappers, not pasta.

Brownies
Cut after baking. Wipe cutter, and coat with nonstick spray between cuts.