What’s been going on lately?

So I had been slacking a little on cooking at home, yes I have lots to post still, but I wanted to share with you all what’s been going on in my world. Last Thursday I attended a suite tasting to sample some fantastic food on the menu to order for our suite at the Houston Livestock Show and Rodeo. The past years tasting was good (click HERE for details), but this years was really really good. The quality of food was much better. Here’s a look at some of the food we tasted: 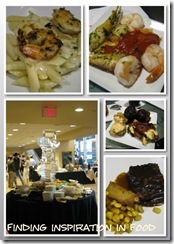 Some of my favorites where the Chipotle Potato Salad and Tenderloin. 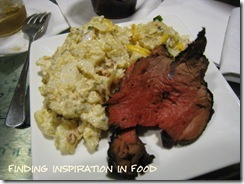 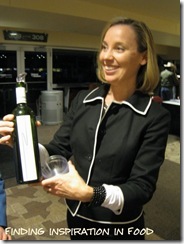 tastings. One lady we spoke to was from Nice Winery. I thought it was neat that the name Nice came about from using a letter of each of the owners children. She told us that they are not in stores such as Spec’s due to them being a smaller winery that could not keep up with the demand. If you’re in Houston check out there store off of 290 where they have a tasty Malbec wine.

Another of my favorite tables where the desserts. I don’t think they where as good as they have been in the past, but they seemed to have more of a variety this year. My favorite was a chocolate covered praline pecans and the cheesecake pops. They have a to die for lemon square, but they didn’t have that out on the table. Another highlight was meeting the author and restaurateur Grady Spears. He has a show on tv called The Cowboy’s Kitchen, he has a restaurant in Fort Worth called Grady’s Restaurant. and author of 6 books. He’s a very busy man, but he’s so down to earth I really enjoyed talking to him and listening to all of his stories. 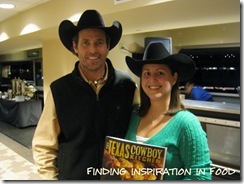 I’ll make a few recipes from Grady’s book The Texas Cowboy Kitchen as well as doing a giveaway to kick off rodeo season towards the end of February. I hope you’re excited because the book is also autographed! I hope to pick his brain a little more so if you have any questions for him let me know and I’ll ask him. He’ll be one of the judges of the HLSR BBQ Cook-off and will be filming a show for PBS during the rodeo. 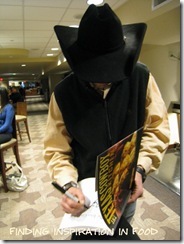 In other news I wanted to wish my hubby’s grandfather a very special Happy Birthday!! He turned 90 on February 1st, isn’t he a cutie? 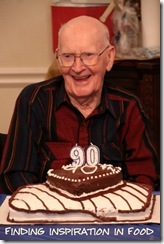 We where in charge of bringing balloons and ice cream, I just wasn’t aware of how huge these number balloons are! 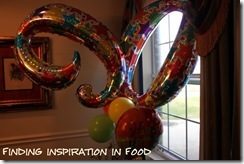 Other then that, I’m gonna be on hold cooking for a while as my kitchen and living room floor has to torn up. Construction is a nightmare, but lucky for you guys I have a post in my pocket so you won’t miss a beat. Stay tuned next week because it’s full of recipes to get you ready for Valentines!!