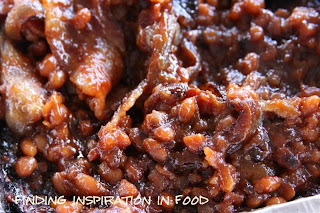 Most of you know that I’m a volunteer durring the Houston Livestock Show and Rodeo. 2 years ago was the 75th Anniversary and named the “year of the volunteer” where they put together a cookbook with recipes from volunteers. I love the local cookbooks, nothing against the major lines beause I like those too, it’s just something about the local cooks in the area know and understand what others like. Of course your dealing with a lot of cowboys and cowgirls so you know it’s gonna be good.
I recently made this when we had some friends over to try a trial run for the upcoming neighborhood BBQ cookoff. I felt like I ate all day long and I was sweating meat, but it was all worth it. I think we’re gonna do great this year!
World Championship BBQ Baked Beans
(Adapted from the HLSR year of the volunteers cookboob)
2 cans (16 oz each) prok and beans, drained
1/2 cup ketchup
1/2 cup white sugar
1/4 cup liquid smoke (I used a little less I don’t like it so overwhelming and I was cooking it on the grill)
2 tablespoons Tabasco sauce
1 large white onion, chopped
1/2 cup BBQ sauce
3/4 cup brown sugar
1/4 cup Worcestershire sauce
1 tablespoon yellow mustard
8 strips bacon

Mix all ingredients (except bacon) and pour into a 13x9x2 pan. Cut the strips of bacon in half and lay on top of bean mixture. Bake at 350 degrees for approximately 1 1/2 hours. The only thing I did differently is put it on the grill until the bacon looks done. 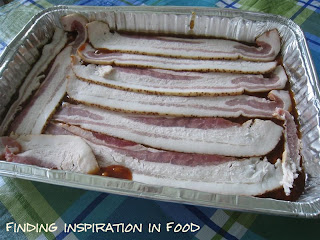 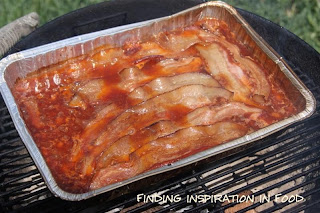