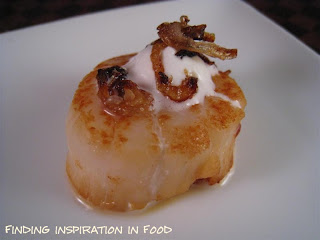 I’m always inspired by fancy food dishes that almost looks too good to eat. This recipe is one I found from an old magazine. It is really pretty to look at, but honestly doesn’t taste like anything. You almost have to wait till the scallops get cold to put the whipped topping on or it starts to melt. (see my pictures) I also don’t believe this person wanted much flavor from it either besides a light airy taste. I would make it again, but as usual change it up, maybe put toasted coconut in the whipped cream and season the scallops more.
Seared Scallops with Shallots and Coconut Cream
(Adapted from Sunset Magazine, May 2003)

1/2 cup coconut milk
1/2 cup thinly sliced shallots (I used 2 small shallots)
1/4 cup vegetable oil
8 sea scallops
salt and pepper
In a bowl, with a mixer on high speed, beat whipping cream and coconut milk until soft peaks form. Cover and chill while preparing shallots and scallops.
In an 8 to 10 inch nonstick frying pan over medium heat, stir shallots in oil until crisp and golden, 6 to 10 minutes. (Mine took way less time like 2 minutes) With a slotted spoon, transfer to a paper towel to drain.
Rinse scallops and pat dry. Sprinkle both sides with salt and pepper. Add scallops in a single layer to frying pan (no need to wash) and cook, turning once, until browned on both sides and barely opaque but till moist-looking in the center (cut to test), 3 to 4 minutes total. Let cool to room temperature, about 5 minutes.
Arrange scallops on a platter and top each with about 2 teaspoons coconut cream. Sprinkle equally with fried shallots. 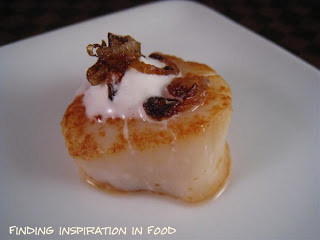 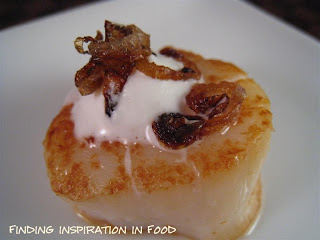