Soup in a jar and craft project 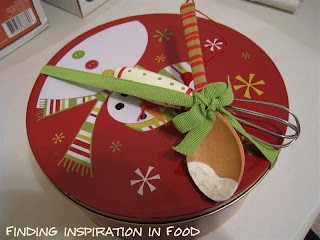 First up is an inspiration I got from a package of cookies I got from my mother in law one year. There’s something about tins and baskets I have a hard time re-gifting. I’ve held onto this tin for 2 years now I love the little ornaments attached to the top of the tin. So while I was at the 99 cent store I ran across this package of 4 wood utensils and almost started jumping up and down like I won the lottery because I knew exactly what I was going to do with them. 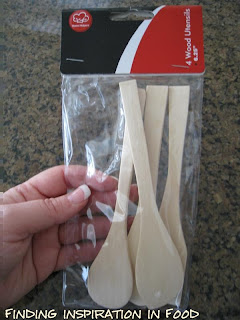 Of course knowing that Christmas is getting closer and closer I have officially labeled myself as a crazy lady for adding on one more thing to do but how can you resist a cute project that took me 30 minutes to do? I first started by painting the “icing” on the front of the spoon with white paint. After starting I realized I could have just whipped out the white glue and done the same thing, but since I already had the paint brush and paint going I stuck too it. Next sprinkle on some glitter and let them dry. 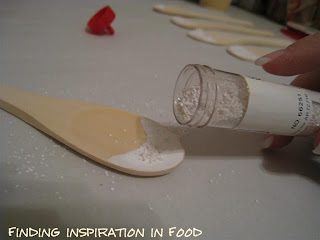 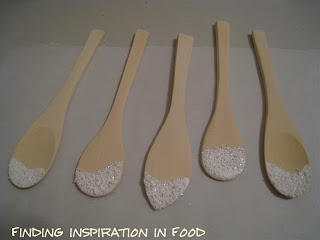 I then figured I was done, but figured they looked too plain so I whip out the red paint and start making designs on the handle. 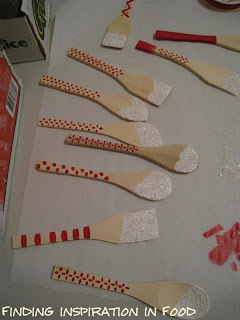 My husband drilled some holes on the top so I can run some ribbon in it and they’ll now be ready for the basket. 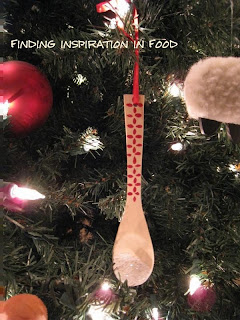 Moving on to my soup in a jar…. 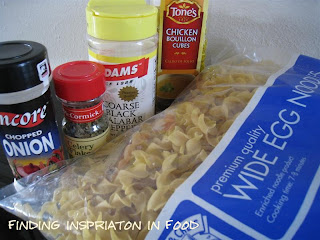 I love making homemade gifts and it’s much easier when you can do something like this to make ahead of time so you aren’t baking up a storm the day before so your recipient gets the freshest product available. With 5 ingredients you can’t beat this deal. My husband offered to help make them and since he got stuck on unwrapping the tiny chicken bouillon cubes he’s determined that someone should invent edible paper so they just dissolve.
Chicken Noodle Soup In A Jar
(Adapted from Gifts in a Jar)
2 tablespoons minced onion
2 tablespoons chicken bouillon granules
2 teaspoons celery flakes
1 teaspoon pepper
4 cups wide egg noodles
Layer the ingredients in the order given into a wide-mouth 1-quart canning jar. Pack each layer in place before adding the next ingredient.

Attach a gift tag with the cooking directions. 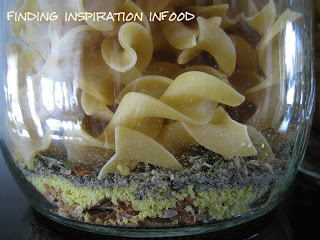 I have a word document already done that took me an hour to put together so to save you time let me know if you want it and I’ll be more then happy to email you the template. Once I got it all typed, I printed it and folded it where I thought would be a good place for the tag to fold open. 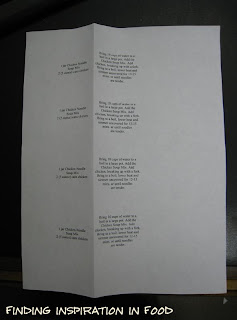 I then got out my hand dandy scrapbooking tools. (I can now argue with my husband that I do use them and just because I haven’t had time to scrapbook doesn’t mean I don’t use the stuff!) So anyway, I took the circle punch and offset it from the paper so it would fold on the top of my jar. 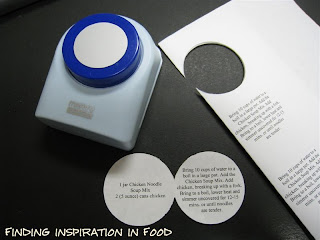 With the title I printed it on a green paper and circled punched it out and took my adhesive and stuck it to the back side of the ingredient side circle. 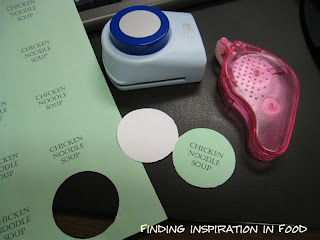 I then attached it with adhesive on the back side of the directions to the top of the jar. I will have a picture later of the finished product I forgot to take a picture. Tie some pretty ribbon around the jar and you’re done!
Up next tomorrow I have a Cheddar Beer Spread!