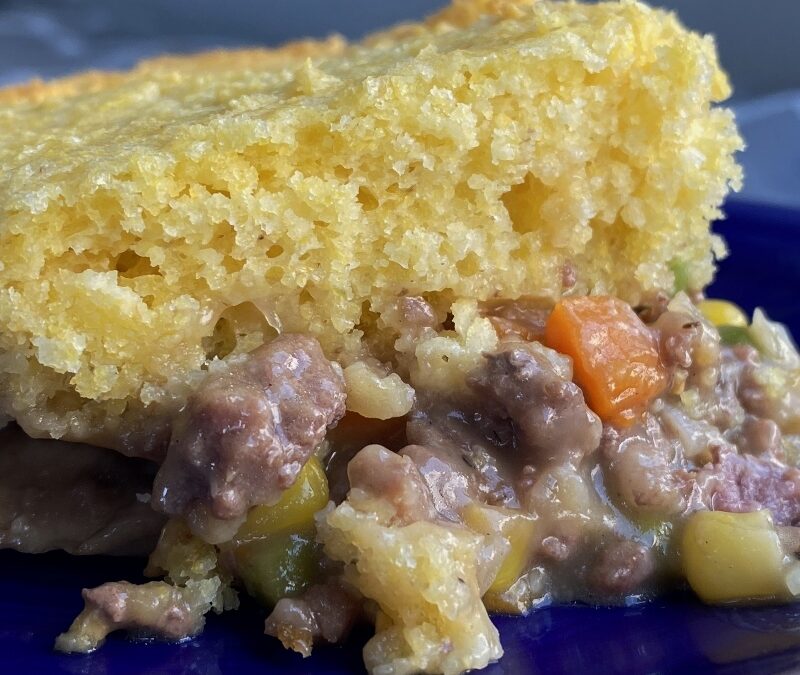 This recipe is really good! It’s for sure going into my Fall and Winter rotation of recipes. while i used venison you can easily swap out and use ground beef.

In a heated cast iron skillet, brown the ground venison over medium heat. You may wish to add a little oil to the pan depending on how lean the meat is.

When the meat is about half cooked through, add onion and mushrooms to the meat and continue to cook, stirring periodically to ensure that everything is cooking evenly.

Add butter to the meat mixture. Stir until melted.

Slowly add the flour, stirring so that it is absorbed as it is added.

Once the flour is fully absorbed into the meat mixture, slowly add the broth, about a half cup at a time. Stir until it the mixture is smooth.

Add the milk. Reduce the heat and simmer until the gravy begins to thicken. This is also when I added in additional seasoning.

Transfer the mixture to one 9 x 13 baking dish or divide evenly into two 8 x 8 baking dishes.

Prepare the corn muffin mix according to the direction on the box. Spread evenly over the top of the venison-veggie mixture.

Cover with foil (you may wish to spray it with non-stick spray so it doesn’t stick).

Bake for half an hour with the foil on. Remove foil. Back 10-15 minutes longer until the gravy is bubbling and the cornbread topping is golden brown.

NOTES
Save a dish and leave the mixture in the cast iron skillet. Top with corn bread and bake in the skillet.