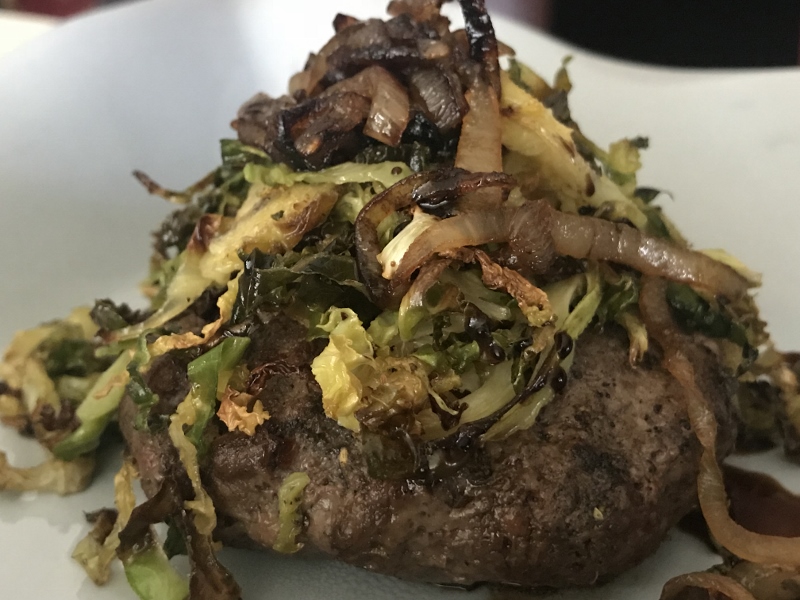 When trying to eat healthier, it’s hard to ask for a burger with no bun. this recipes makes you feel like you are having a fancier meal and I didn’t miss the bun as much. We also used deer meat instead of bison, simply because we have a freezer full of it and it needs to be used up. I also think ground chicken would be tasty with the brussels sprouts and shallots.

Preheat the oven to 400 degrees F.

Spread the Brussels sprouts in an even layer on a large rimmed baking sheet. Drizzle with the butter and season with salt and black pepper. Toss until well coated. Roast for 20 to 25 minutes, stirring once or twice, until the sprouts are lightly browned and crisp on the edges.

Meanwhile, heat the remaining 2 tablespoons oil in a large heavy skillet (cast iron works well) over medium-high heat. Add the shallots and season lightly with salt and black pepper. Reduce the heat to medium and cook, stirring occasionally, until the shallots are crispy, about 10 minutes. Remove the shallots from the skillet and drain on paper towels.

Add the bison patties to the hot skillet and cook, turning once, until they register 160 degrees F. Remove the burgers from the skillet and let rest for 5 minutes before serving.

Serve the burgers topped with the Brussels sprouts and crispy shallots and drizzled with balsamic vinegar.