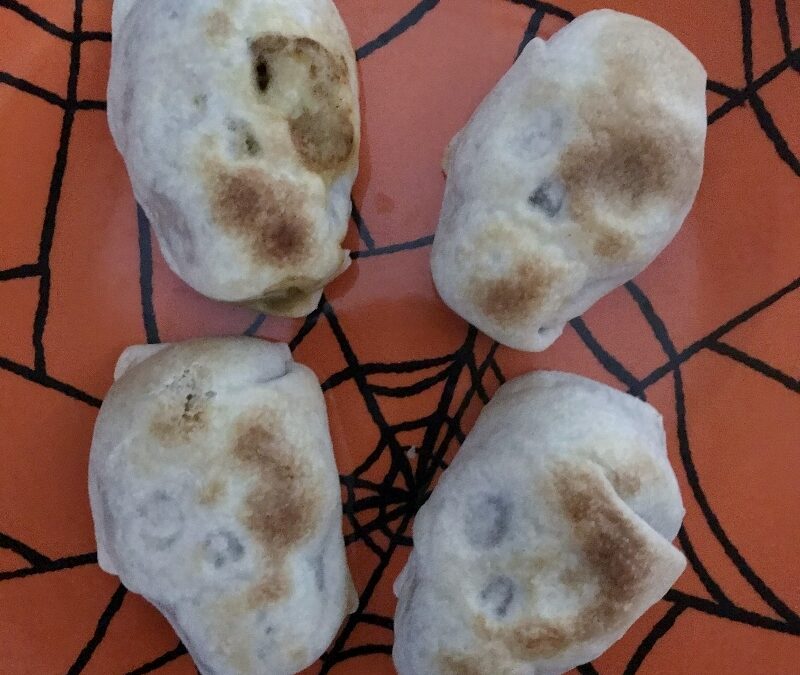 This turned out to be a super fun dinner. I think I might take them out next time and let them brown a little more on the outside so you can see more of the details of the skull, but my son loved it. They are super easy to prep ahead of time and pop in the oven when you are ready. I didn’t make my own tortillas, I used some raw ready to cook ones at HEB I like using. You have to let them warm up a little otherwise they won’t be as flexible and go into the mold for you.

Tortillas:
Combine flour, baking powder, and salt in a mixing bowl and blend with a fork or whisk.

Add half of the lard and use a pastry cutter to cut the lard into the flour.

Add the remaining lard and continue to cut it into the flour until it resembles coarse crumbs.

Slowly pour in the water stirring as you go until the dough comes together. Add at least ¾ of a cup of the water then only add any remaining water as needed.

Knead the dough on a flour-dusted cutting board until the dough is no longer sticky and comes together in a cohesive ball then cover the dough and set aside for 10-20 minutes.

Burrito Filling:
Heat half of the oil in a large skillet set over high heat.

Add half of the ground sirloin and cook until browned.

Add the other meat back into the pan and stir in the taco seasoning and water.

Bring to a boil then reduce heat to medium-low and simmer until most of the water has evaporated.

Cut the dough into 6 equal portions.

Dust your work surface with flour.

Roll out a portion of dough thinning out the edges.

Drape the dough over one skull in a 6 cavity non-stick pan allowing the dough to form the skull shape.

Sprinkle on 1/6th of the cheddar cheese, black beans, corn, and tomatoes or your favorite burrito filling. I just mixed in with the meat instead of doing each one individually.

Fold the dough over the filling, cutting off any excess dough and pinching the seams together.

Whisk together the egg and water then brush the top of the dough with egg wash.

Bake for 24-26 minutes until the tops of the dough turn lightly golden brown.

Remove from the oven and set the pan on a cooling rack for a few minutes then turn out the burrito skulls onto the cooling rack.

Serve with a side of sour cream, guacamole, or salsa.