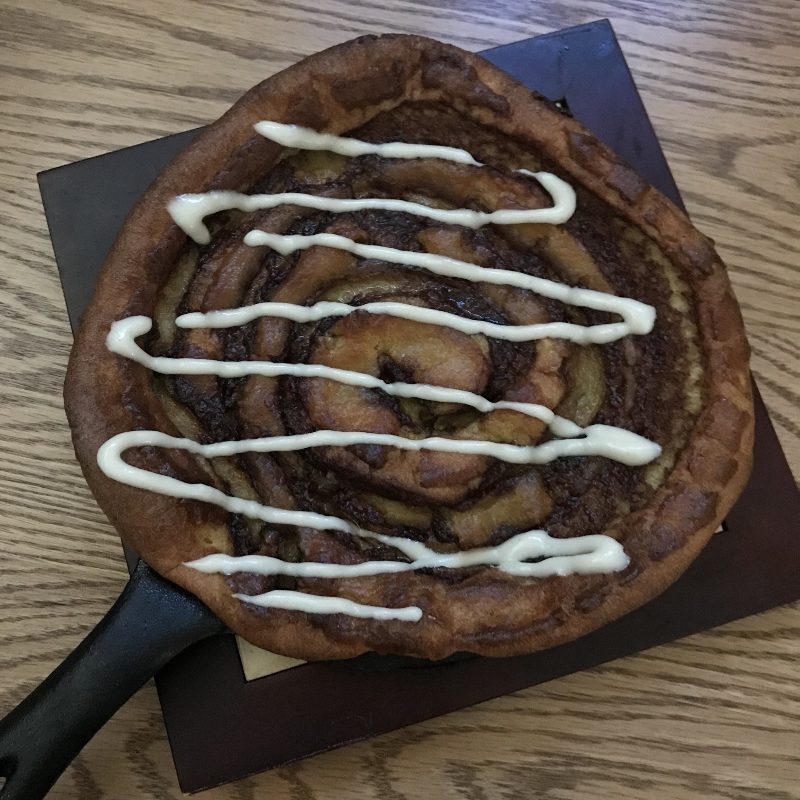 I am so excited about today’s post! Ho cute are these mini cast iron pans? My boys devoured these dutch babies and they came out perfect. I love being able to change up the usual breakfast especially on the weekend. You can prep most of this ahead of time sure as making the cinnamon filling, icing and putting all your cold ingredients in the blender so all you have to do in the morning is blend it all together. This will wow your family and guest and they’ll never know how easy it was to make!

Put the flour, milk, pumpkin, brown sugar, eggs and remaining cold butter in a blender. Blend until well blended. Scrape down the sides and blend for about 30 seconds more.

To prepare the cinnamon swirl mixture. Stir together the butter, brown sugar and cinnamon by hand or with a beater/mixer and add to disposable piping bag or plastic baggie with a small hole cut in the corner.

Remove the skillet, pan or skillets from the oven and swirl the butter all around and then sprinkle with a good amount of brown sugar and a dusting of cinnamon. Pour the batter into the skillet and sprinkle evenly with chocolate chips (if desired). Now grab the cinnamon swirl mixture and gently swirl the cinnamon mixture into the batter.

Place in the oven at 450 degrees for 5 minutes. After five minutes reduce the temp to 400 degrees. DO NOT OPEN the oven during this first 15 minutes! After 15 minutes you can quickly peak inside to make sure your dutch baby is not getting burnt, but it should need another 5 to 10 minutes of cooking time. The dutch baby is done when the edges are puffed and golden. Remove from oven and let cool for 3 minutes, then drizzle with the frosting and go to your happy place!

While the dutch baby is baking make the frosting. In the bowl of a stand mixer, beat cream cheese, vanilla and powdered sugar together until well combined. Add milk and mix.

Drizzle over the warm dutch baby.