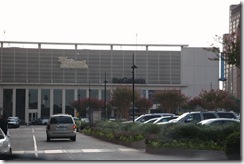 We visited Del Frisco’s back in 2011 during their Restaurant Week (click HERE to see my review). Sadly not much has changed and most of my complaints are still valid today several years later. This is the second chance I’ve given and I won’t be back again.

We had a 6:30pm reservation and was lead upstairs to where we were one of 3 tables seated. Quick prompt service followed by the waitress getting each of our names. We ordered drinks and all of our food choices for the evening and where off to a great start. By 7:15 we just got our salads and the upstairs started to fill up. This was our down hill spiral to the end of the night. Our waitress never really came around and when she did she said I’ll get my team to clear the table. Ok so your team was a bunch of food runners who mainly stood on the side most of the time talking. How come it took so long to get our food? Tables came and left around us all ordering multiple courses. I feel like the only change for the better from our visit in 2011 was we where at least offered the pepper grinder this time!

So onto the food….

For cocktails I had the VIP Martini $14 (Svedka Clementine infused with sweet Hawaiian pineapples). The pineapple is soaked for 2 weeks in vodka then pressed to make this cocktail. I have to say this was a great recommendation from the waitress as it was really tasty. 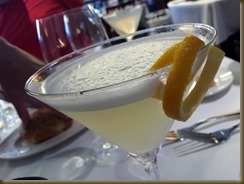 The bread was just as good as I remembered. Super soft, warm and fluffy as well as soft whipped butter. 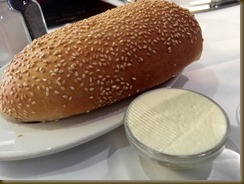 Fried Calamari $17 (Shanghai Style). Once again by far the best thing we had all night. I highly recommend ordering this. There’s a nice sweet, heat, Asian sauce that goes really well instead of the traditional marinara. I could have eaten several orders of this. It’s a little on the high end for an appetizer, but it’s really good. The priced was $15 in 2011 and has gone up. I really think it should be priced at $10. 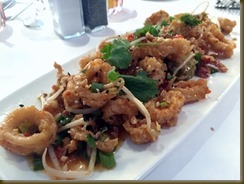 We all ordered the Caesar Salad. (regular menu price $9.50) Nothing to wow about, just a good standard salad. I liked the croutons being lightly baked as apposed to rock hard like some places. 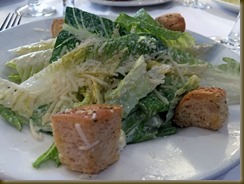 For the main I ordered the broiled Filet Mignon 8oz with chateau potatoes and thin green beans. I did the entrée enhancement of $10 for Oscar Style. (regular menu price $42 for the steak, plus add on of Oscar and additional sides). The steak was better than I remembered last time, because last time I didn’t care for it. I love Oscar style, again is it worth $10 probably not. I had room temp sauce, minimal shavings of asparagus and just a few hunks of crab meat. For $10 I could make a batch to feed 20 people and they would get more crab and asparagus than what I got. I will stand by my last review and say they have good potatoes. The green beans on the other hand needed to be cooked a lot longer. They where so hard I had trouble cutting them with a steak knife. 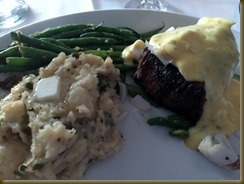 D and T upgraded their steaks to the Prime Ribeye 16oz $18 entrée enhancements plus $6 Black Truffle Compound Butter (regular menu price is $48). Honestly with both guys getting the Prime steak they where not the same. I should have taken a picture. D had a prime, his was juicy, tender and flavorful. T did not his was full of fat, tuff and didn’t look the same. 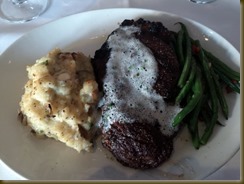 K got the Pan Roasted Chicken. I missed on getting a picture. She said it was good and juicy and wouldn’t change anything. Her green beans where under cooked as well.

We also got a side of lobster mac and cheese $17. Not sure I would order again. It was really salty, and the sauce was really loose. 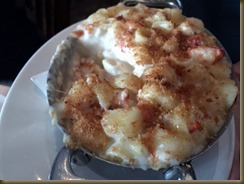 I ordered the cheesecake with strawberry and K got the cheesecake with butterscotch. I couldn’t wait for this since they where out last time we visited. Sadly once again it was a disappointment. K ended up with the better topping I would have just ate a bowl of that. The cheesecake tasted like whipped whipping cream with a touch of cream cheese. I see why they laid it down it was so fluffy I don’t think it would have stood up. The taste was just off. 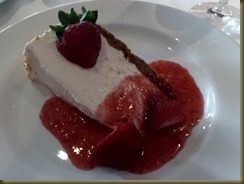 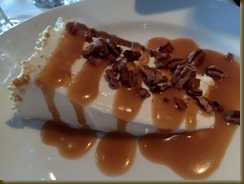 The guys both got the warm banana bread pudding with caramel sauce and fresh whipped cream. Again glad I didn’t order this. At least the cheesecake was edible. the bread pudding was so dried out and it was room temp so the ice cream didn’t melt except for one little drip on it. 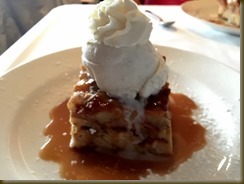 From start to finish we where there 2 hours. Normally I wouldn’t care, but when it’s this little of food it should not take 2 hours. It took us 45 minutes just to get our salad. Another 30 minutes after that we got our main entrée. By then my food settled and I wasn’t as hungry anymore. On 2 occasions we alerted the manager or whoever the 1 of 6 guys running around in suits where. Their response “I’m sorry let me go check on that”, only never to return to check on us again. Our bill ended up being $400 after all the drinks we ordered to kill the time. I’m not proud of this, but I have NEVER walked out of a restaurant without tipping. This was a first for me. The food was crap, the service was crap and the attention to detail was lacking in a huge way. I guess they figure they have all the business people meeting after work who run up bills, but this was in no way how you treat people who come in for a good meal. Luckily we live in a big city with lots of steak places to pick from, because this is high on my list of DO NOT TRY.