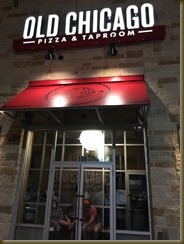 Old Chicago Pizza and Taproom is celebrating their 40th anniversary this year. I recently got to swing by their new location in Katy, Texas and see what all the hype is about. I must say the hype is worth it!! They have a great location and I got word from the manager that the President of the company was in town looking to add 4-6 new locations to the Houston market. The only issue I see is they could use a larger space.

The inside space is nicely done and not overwhelmed by annoying ads and junk everywhere. The tvs are great to catch whatever games are on and it’s family friendly so we didn’t feel it leaned to far adult for being a later meal with kids there. They even have nice large tags hung on the taps to let you know what they are tapped out of. 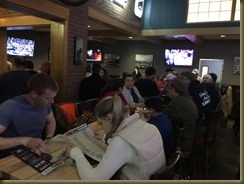 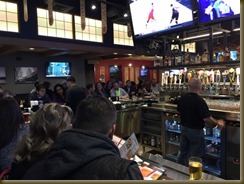 We arrived at 6:45pm and it was pretty crowed as expected for a Friday night. To fill the time we waited at the bar for 30 minutes before being seated, but it allowed us to sample a few beers. By the time we where seated the hostess was telling people it was a 45 minute – 1 hour wait. My advice arrive around 6pm or 8pm!

D ordered the 8th Wonder Dream Shake $5.50 and I got the Oskar Blues Death By Coconut $6.50. Holy smokes was that coconut one good, so it I went to order another one and it tapped out! The bartenders are some of the better ones I’ve come across they have a great knowledge of the beers and flavors as well as just general conversation so you don’t keep glancing up at each other awkwardly. I did find out later from the manager that they go through an extensive training with videos and learning about all the beers. Makes sense as they recommend things based on what we ordered rather than trying to sell us the same Blow Joe basic beer. 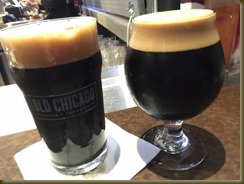 In the age of all the technology I was pleasantly surprised to see a wall plug charging area at our booth. 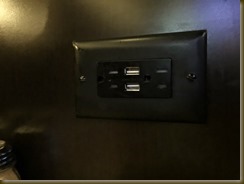 We started off with appetizers which both arrived within 10 minutes of ordering them. First up the SICILIAN PEPPERONI ROLLS™ $8.29 (Signature dough with pepperoni, green onions and cheese. Baked and served with pizza sauce.) This is a great appetizer if you want pizza, but really wanted to order something else. The dough is nice and soft and they had a perfect amount of dipping sauce accompanying it. 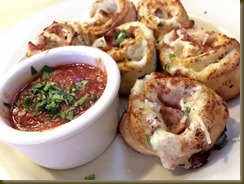 HAND TOSSED CHICKEN WINGS $6.29 for 5 boneless wings we got the SCREAMING MANGO Flavor (Sweet mango spiked with habañero and fresh jalapeño). To me these seemed like they where ready first and sat out a little so they lost their crispyness. The sauce was evenly coated on them and had heat, but not burn your tastebuds off. I’m still a wing fan so I would totally order these again and buy the sauce if they ever sold it like other chains do! 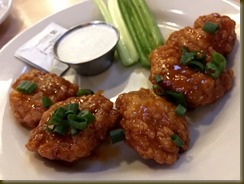 About 20 minutes later our entrees arrived. D ordered the STUPID SPICY BURGER $10.99 (Seared with blackening spice, topped with a stupid spicy blend of sautéed jalapeño slices, onions, and crushed red peppers, then finished with pepper jack cheese and crispy breaded jalapeño slices. Served on a toasted bun slathered with jalapeño cream cheese, lettuce and tomato.) This burger is a mouthful for sure, but in a good way. It’s spicy, but not over the top where you can’t finish it. The meat is nice and tender. Be sure to ask for a trio of sauces for the fries, you have an option to pick one, but oddly enough the one we would have picked we wouldn’t have been as happy with. Also on a side night I would love for them to sell the fried jalapenos….mmmmm so good!! 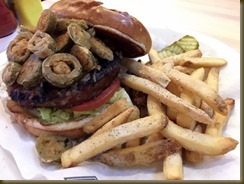 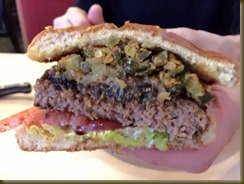 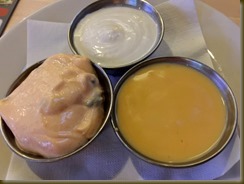 I ordered the TUSCAN CHICKEN WITH SPINACH $12.49 for Thick Crust and Small Size (Lemon garlic sauce, sun-dried tomatoes, applewood-spiced chicken, bruschetta tomatoes and roasted garlic. Topped with fresh spinach tossed in a lemon vinaigrette.) I happened to love this pizza! Don’t shy away from it with the list of odd combo ingredients. The spinach salad on top is to die for! I could have eaten a bowl of that it was offered as a salad option. Having a bite of pizza with that freshness on top really creates a whole new twist on traditional pizzas and adds a punch that sends it over the top. My only complaint was that the chicken seemed a little dried out. 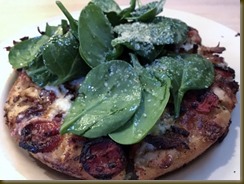 Dessert came out 20 minutes after ordering and we got their WARM CINNAMON CRUNCH ROLLS $4.79 (Fresh, warm cinnamon rolls topped with a caramel sauce, cream cheese frosting and cinnamon crunch topping.) This is perfect for 2-3 people to share, maybe even 4 if you don’t want a huge hunk. There was a punch of cinnamon flavor, but I would probably try another dessert next time as this one seemed to be a little dried out like it was baked earlier and reheated it or it was over baked. 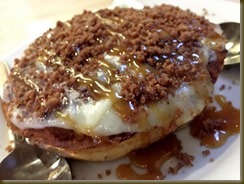 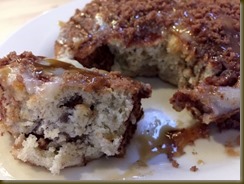 I loved the special touches they do with your leftover containers. It’s awesome how it was nicely labeled with the date and what is in the box. Not something I’ve seen before. (Not that my fridge is packed full of leftover containers, but if you had multiple items I could see the convenience.) 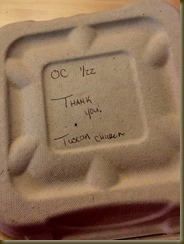 You will also want to be sure to sign up for their rewards program. The app is pretty neat too, to keep up with your beer tours. You earn points that add up to free stuff. 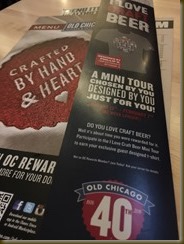 If you’re interested in testing them out for happy hour they look like they have a great line up. I did hear from several people I talked to there that on special beer tap nights that start usually at 6pm they are tapped out rather quickly so be sure to get there a little early. Once you sign up for the rewards program you’ll get all the special taps and events they host. 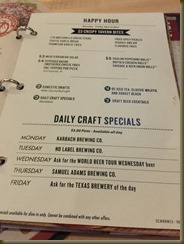 As a comparison it’s a cross between BJ’s Restaurant and World of Beer. Their menu has just enough variety offering something for everyone, without being overwhelmed by too many choices. The wait can be a little long with the crowd, but rest asure you won’t see lazy waiters here sitting around talking and on their phones. I never saw them stand still!

A special thank you to the managers Lucas and Scott for sharing the Old Chicago experience with us and a special shout out to our awesome waiter Breion who goes out of his way to make sure everything is perfect, as well as including his shadow trainee Seth.

I can’t wait to go back and enjoy a beer as well as some of their other food items, it’s worth a stop in if you haven’t been!!