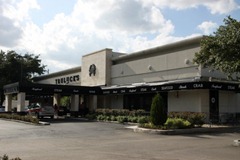 Surprisingly we have never been to Truluck’s, but they have been around forever. I had made reservations for 6:15pm, but we arrived early to try out their Cocktail Hour from 4:30pm-6:30pm. They have a really great bar menu that’s half off along with 25% off all bottles of wine and half price cocktails. We decided would would be back for sure to take advantage of this again. You could make a meal out of the large portions we saw them bringing out and have a few cocktails. 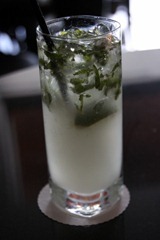 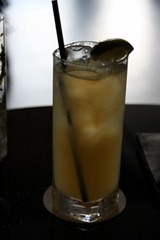 We also tried the Crab Cake Sliders (regular $18, but only $9 for cocktail hour). I loved the flavor of these. The sweet roll is toasted and a fabulous compliment to the crab cake. 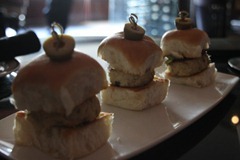 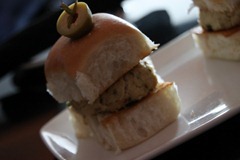 After a great starter we couldn’t wait to taste the food in the restaurant. The bread was so nice and warm and you get more then one tiny ball of butter which is nice and soft. 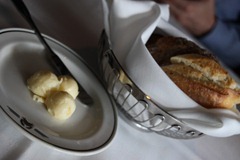 For the first course D ordered the Ice cold Watermelon & Local Tomato Gazpacho $11 (with jumbo lump blue crab). This is a great starter dish which is nice and refreshing. 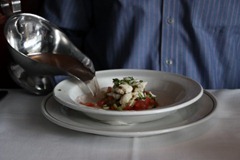 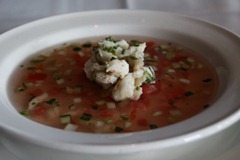 I ordered the Creamy Lobster Bisque $8 (with fresh lobster and horseradish goat cheese). I asked for them to leave off the goat cheese, I like goat cheese I just didn’t really know how the horseradish would be in it. The bisque is by far one of the best I’ve had. There was a nice heat to it from the seasoning and I could have had a never ending bowl of it. 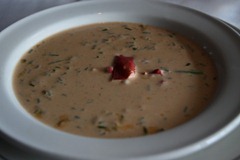 Since they are known for having the freshest crab we ordered 4 medium Fresh Pacific Stone Crab Claws $18. They where nice and fresh, but not as sweet as I thought they would be. The dipping sauce was really good with it. 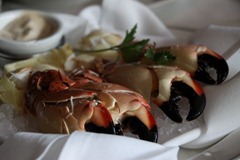 For the second course D ordered the Cioppino $28 (a feast of seven fishes, fresh fish, shrimp, mussels, calamari and blue crab simmered in a tomato and herb broth). I was nervous when he ordered it because we haven’t found a good one besides the one we had on our trip up north. To our surprise it tasted really close to that one so he was on cloud 9 which brought back a lot of memories for us. 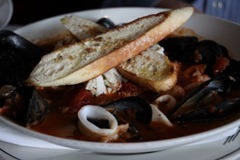 I on the other hand was not as excited with my second course. I ordered the Crab Alfredo (blue crab, king crab and snow crab in a rich pecorino sauce tossed with fresh pasta and topped with tomato and basil). My first bite tasted like raw pasta. The waiter offered to take it back and bring another one. A few minutes later he came back saying that the chef says that’s they way it taste because it’s fresh pasta. REALLY? I make pasta at home it doesn’t taste like raw dough when it’s cooked. I think he was being lazy. So I ended up ordering the Beef Rockefeller (tenderloin medallions topped with creamy spinach fondue, fried oysters and loaded potato cakes). I didn’t really care for this dish the flavor was just off. The best part was the potato cakes which where really good. 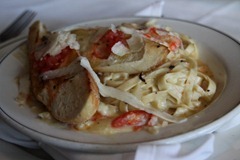 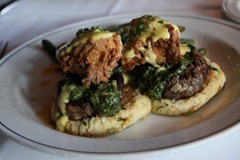 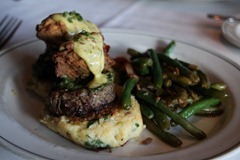 Dessert was a much better experience. The Sugar-Free Coconut Cream Pie (with shortbread crust and vanilla whipped cream) was amazing. You couldn’t tell that it was sugar free. We also got their famous Carrot Cake (with cream cheese icing, warm butterscotch and spicy Texas pecans). I wasn’t a fan of the butterscotch on there, but I would order it again because the cake itself was really good. 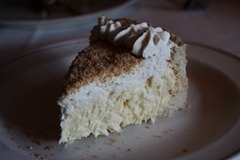 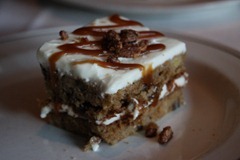 Overall I would go back for sure. Except for my main course everything was really good and seasoned well. Their prices are a little high, but totally worth every penny. I recommend going during their cocktail hour and trying their food out that way, they have a nice assortment on their bar menu.