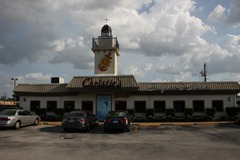 Christie’s Seafood & Steaks has been around since 1917 and we had never been so what’s a better time to go then Houston Restaurant Week? Walking in I was a little shocked thinking it would have a little fancier then what it was. We weren’t dressed up, but we where in better clothing then most people who where dining. It almost seemed as casual as a Red Lobster.

We started out with the Seafood Gumbo $7.95 and Shrimp Chowder $7.95. D and I differed on what we liked better, but it worked out getting one of each. 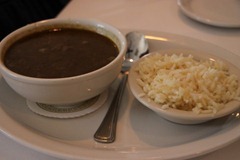 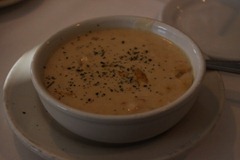 For the second course we had the Salmon Royale $20.95 (blackened salmon topped with crawfish tails, peppers and mushrooms in a our special cajun beurre blanc, served with dirty rice) and Stuffed Snapper Fillet $23.95 (fresh gulf snapper stuffed with our signature seafood stuffing topped with a light chardonnay cream sauce, served with fresh vegetable of the day). By far the best dish was the stuffed snapper. The salmon dish just didn’t have any flavor to it. 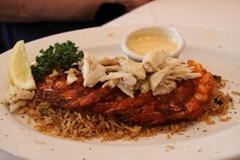 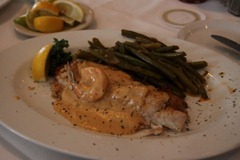 My mother in law ordered the Gulf Shrimp and Jumbo Lump 15.95 (blackened gulf shrimp topped with sautéed jumbo lump crabmeat with house wine butter, served with dirty rice). The shrimp where cooked perfectly and I was surprised they where seasoned really well and you got a fair amount of them. 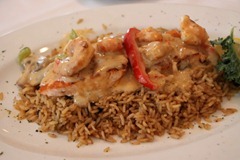 We also ordered a side of Onion Rings which where ok, I found it interesting they paired it with some marinara sauce. 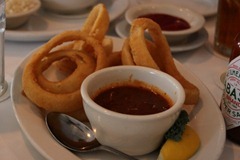 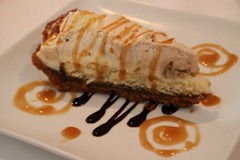 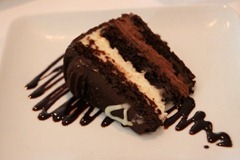 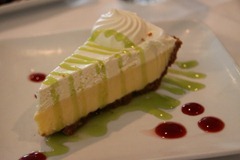 We thought the chocolate cake would be the one to pass on, it tasted dried out like it had been sliced that morning and kept in the fridge until someone ordered it. The key lime had a nice strong lime flavor to it and I really enjoyed the bananas foster pie.

Honestly I don’t think I would go back. Houston has so many other really good seafood restaurants that I would rather go to instead. As for the savings using the Houston Restaurant Week price of $35 per person you kind of break even so it’s not a huge deal to go, but it’s a nice way to test out a new place.