As I mentioned on my last post, once a year the month of August turns into Restaurant Weeks. One of the best ways to try new restaurants is dining out during this month! For a set price of $35 for dinner you get regular size portions at a very discounted rate and restaurants donate $5 per dinner sold to the Houston Food Bank. It’s a win win for everyone! You have to be sure you ask for the restaurant week menu when you sit down, because they don’t just hand them out when you can pay full price on the regular menu.

We haven’t ever been to Ruth’s Chris so we wanted to see if it was as good as what we thought it would be. We went to one of their older locations off of Richmond Avenue. I forgot to ask the waitress when they opened. You could tell it was an older place. I also found it odd that everyone from the hostess to the wait staff where all older too or maybe it’s because we went on a Sunday afternoon at 5pm. Either way everyone was really friendly. I didn’t like that it’s valet only, but what can you do?

While I noticed that usually the manager makes the rounds at some point during the meal, the General Manager, Jason Perkins, made bee line to our table. The waitress said she told him I had a big camera on the table and thought he should visit. I didn’t mention I wrote a review blog, just that I did photo contest and wrote a food blog. Now why she would tell me that is beyond me. He could have at least greeted the other 3 tables seated near us rather than run back to his office, but that’s just my observation.

Anyway, the bread was a little on the firm crusty side, but the butter was nicely whipped and softened. 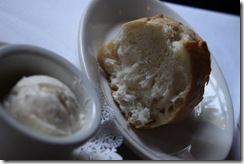 Since we hadn’t eaten anything all day we where starving. We ordered the Tempura Onion Rings $7 (With a honey Thai sauce) Yummy I love a good tempura batter and I really liked the twist of a honey Thai sauce instead of ketchup. My disappointment – the photo online shows 7 onion rings we only got 5. D told the waitress it was fantastic, but would be better if we had more onion rings. She responded with no problem I’ll go get you more. Yeah she comes back with an additional sauce. LOL we kept the sauce to the side in case we needed it later which I’m glad we did. 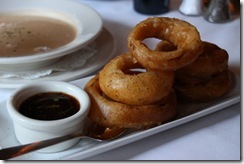 We also ordered the Lobster Bisque $9, which was to die for. Really good and I recommend ordering it. 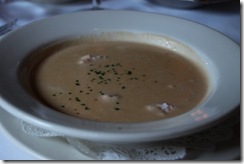 Now onto the Restaurant Week menu. We started out with the Caesar Salad (regular menu price of $7.50) (Fresh crisp romaine hearts tossed with romano cheese and a creamy Caesar dressing. Topped with shaved parmesan cheese and fresh ground black pepper). Nothing too fancy and tasted like a normal Caesar. I liked that the lettuce was already pre-chopped into bite size pieces. The Seafood Gumbo (Not on their regular menu) (Classic Gumbo with Andoille Sausage, Shrimp and Crab Meat). I have to admit it’s pretty good and tasted like one I’ve made. If anything I think it could have used a little more spice to kick it up. 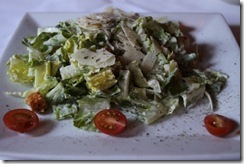 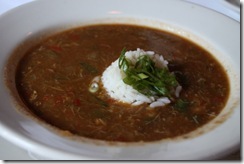 The second course and most important course is where it all went wrong. They are proud to tell you that the steaks are broiled at 1,800 degrees, each aged, corn-fed USDA Prime steak is seared to perfection and delivered on a sizzling hot plate. I ordered the Petitie Filet (regular menu price of $40) comes with a 6 ounce medallion of our filet topped with 3 jumbo shrimp. I was excited until tasting it. The meat had a really funky taste to it. You might be thinking it’s because it’s dry aged, but I’ve had that before this just had a bad taste to it. The shrimp where overcooked, probably because they where topped on the the 1,800 degree steak. 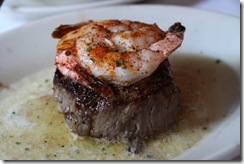 The Market Fresh Seafood Selection regular menu price of $38 (Your server will describe the seafood our Chef has selected for today) wasn’t much of an option for how you wanted it prepared. It came out as a broiled salmon. All I can say is super bland. I’m glad we saved the Thai dipping sauce from earlier, it really made the dish better. 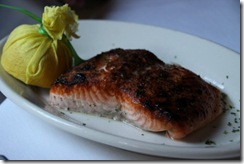 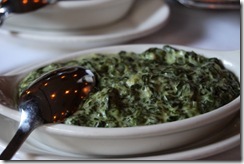 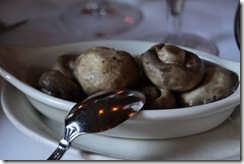 Dessert was back on the positive side. The Bread Pudding with Whiskey Sauce (Our definitive version of a traditional New Orleans favorite) was so good. The serving sizes where huge so we took half of that home as well as the whole cheesecake. 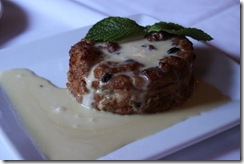 The Cheesecake (Creamy homemade cheesecake served with fresh berries), wow was this rich, but boy was it good! 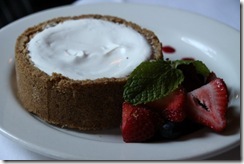 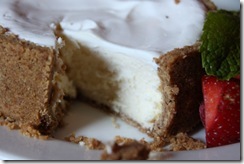 I’m really upset that for a steak place that was the worse part of the meal. If they nailed that I would go back in a heart beat. Maybe we had an off day there or something, but personally I’m on the fence about going back. I’m glad we got to use a gift card because I wouldn’t have paid for that steak. Thank goodness for Restaurant Week, we ended up saving around $38.