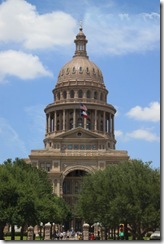 Today was our last day in Austin, Texas. We had done a lot, but we had one last grand thing to visit. The Texas State Capitol.  They offer free tours every 15-30 minutes which last about 30-45 minutes or you can pick up a self guided sheet and walk where you want. Our tour guide was Becca and she did a great job giving us all the history and details about the capitol. The first Capitol was built in 1839 and completed in 1853. In early 1881, officials held a nationwide competition for a new design which was built in 1853, only to be destroyed from a fire in 1881. A temporary Capitol was built across the street until the new building was ready. Recently in 1990-1995 a restoration was done in order to preserve the building for years to come.

As you walk past the life size statues of Stephen F. Austin and Sam Houston you enter the Rotunda and 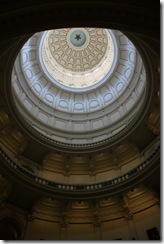 Dome. A very impressive look up to the top of the 215 feet dome you can see the eight foot point to point star and the letters of Texas around it which are 1 foot tall each. 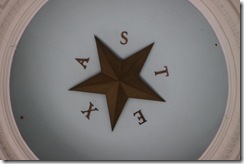 When you look around the walls around you, there are portraits of each president of the Republic and Governors if the State circling four public levels of the rotunda with the most recent on the ground level. 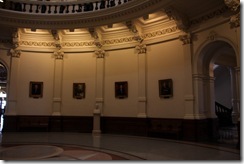 We moved along to the Senate Chamber where the desk are 120 years old. Around the top of the chamber is where the public viewing gallery is. There are no reservations or tickets handed out, it’s open to the public to listen in when the Senate is in session. in the back of the chamber you’ll see 2 large paintings which show the Battle of San Jacinto and Dawn at the Alamo. 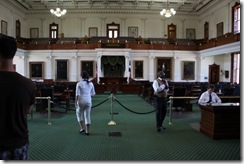 Behind the Lieutenant Governor’s original walnut desk there’s an original portrait of Stephen F. Austin which is the last one ever drawn of him as a gift to his sister for missing her birthday while he was fighting in the Revolutionary War. He died shortly after the painting was done of phenomena. It’s sad that he only had 3 of them done because he thought they where a waste of his time having to sit there and be painted. 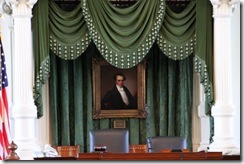 The House of Representatives Chamber is the largest room in the Capitol. There are 150 seats 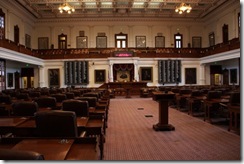 Behind the Speaker’s desk is one of the oldest artifacts: the flag flown from the 1836 Battle of San Jacinto. 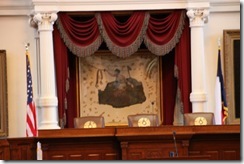 No matter where you look there’s beauty everywhere from the door knobs to the door hinges. It’s really neat seeing all of the details that went into this building. 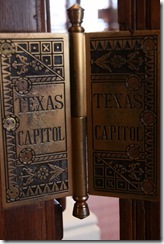 Next we headed down to the underground extension level to see the World War II Medal of Honor gallery. 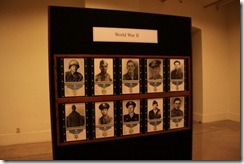 This level is the newest section built in 1990-1993. It’s also where all the meetings take place while they are drafting bills. 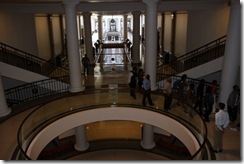 As our tour came to an end I learned one more neat fact. There are 6 seals of Texas on the back side of the Capitol building as well as the circle of the rotunda floor. This is where the name 6 flags over Texas theme parks came from. Pretty cool huh? 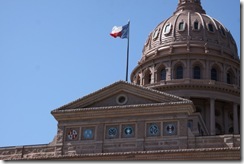 You really need to stop and visit if you’re in the area, the tours are great and you can join in and leave at any point. 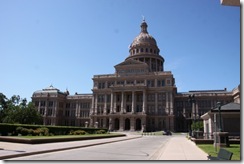 With lunch time approaching we made our final 2 stops before heading back home. First up was Iron Works BBQ which opened in 1978 and is known as a favorite among the locals. There’s indoor seating or a patio which overlooks a bayou.

We ordered the Sampler Plate $13.45 (Sliced Beef, Sausage, and one beef rib). Now I need to remind you I live in Texas and we eat a lot of BBQ so I’m a little more picky then most people are. The sausage was my favorite as well as the BBQ sauce on the table. The rib flavor was good, but they leave the membrane on doesn’t allow the meat to get real tender as it should be. The brisket looked good and had a nice smoke ring, but didn’t taste like anything, I couldn’t even taste the smoke. Overall I think it’s over priced and wouldn’t recommend going. The dish also came with 2 house sides, beans and potato salad. I enjoyed the potato salad which was huge for me because I don’t care for anyone’s. The beans where ok, didn’t taste like anything more special then something from a can. 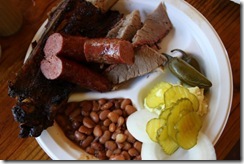 Last stop was a food truck A Touch of Fire. If you don’t eat much Thai food, let me warn you they know how to kick up the spice! Looking at the menu we settled on an eggroll $1 and Thai Taco $2.50 (Spicy sliced beef with onions and cilantro, stir fried in chili-lime dressing, rolled up in a grilled tortilla and served hot). 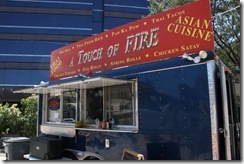 Looking at the taco I was a little shocked there wasn’t more too it for $2.50, but holy cow your lips burn like you just kissed a hot cast iron skillet. As spicy as it is you just can’t stop eating it! Now the egg roll is a waste of money! My finger is bigger then this thing is. It has to be one of those boxed frozen ones I don’t think they make them so don’t order one. 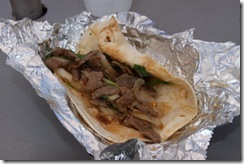 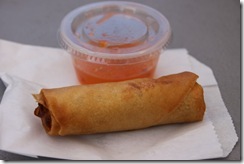 It was a great trip minus the heat, I can’t wait to get back and try more food trucks!