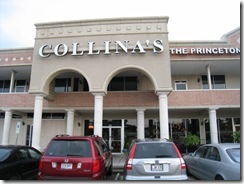 My mother in law invited us out to dinner to celebrate our anniversary and I was excited about trying a new place. We headed to Collina’s Italian Café which has 3 locations in Houston, we went to the Memorial location. This place has several awards from Houston Chronicle and Zagat to name a few, so I knew it had to be good.

When you walk in the space is open and large. You have a view of the kitchen and the dress is casual. 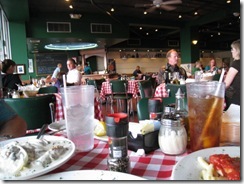 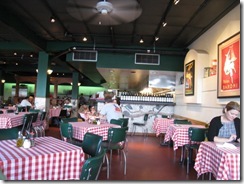 The wait staff was mainly high school students, but I thought they where all polite and did a great job. We where greeted with a basket of what looked like focaccia. I thought it was tasty, but could have used a dipping sauce of some kind. 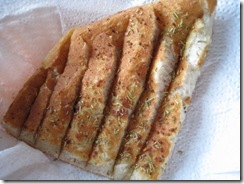 As we looked over the menu we started with the Calamari $7.99 (Lightly breaded and fried, served with marinara) No complaints here, they didn’t over cook the calamari, the coating was nice and not over coated, you even had plenty of sauce leftover to dip that focaccia in! 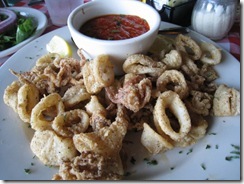 Each of our entrees where served with a house salad. The dressing was good, but they where a little heavy handed on the olives. 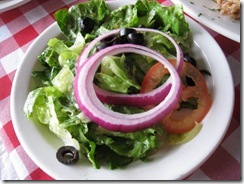 On to the entrees. My mother in law ordered the Fettuccini Tetrazzini $11.99 (Grilled chicken breast, cream, parmesan cheese, mushroom and onions). She seemed to enjoy it with leftovers to take  home from the large bowl of pasta. I thought it was interesting that they had sliced onions mixed in the fettuccini which would seem a little over powering. 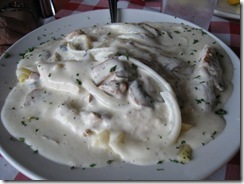 I ordered the Chicken Parmigiana $13.99 Seasoned bread crumbs, mozzarella, and Marinara. Served with penne marinara and fresh spinach). I had no complaints about this dish except I wish the marinara sauce was blended a little more. With it being so chunky the sauce doesn’t stick to the pasta like it should. 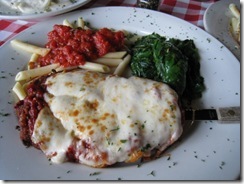 D ordered the Chicken Rosemarino $13.99 (Grilled chicken breast with fresh rosemary, olive oil, garlic, and lemon juice. Served with penne marinara and fresh spinach) We where disappointed that the chicken was overcooked and dried out, otherwise it would have been a good dish. 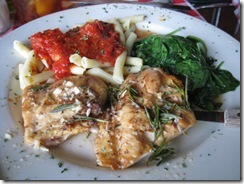 We where stuffed from the meal, but since they knew it was our anniversary they brought us a dessert on the house. My guess was it’s the Chocolate Caramel Pecan Cheesecake. This was really good and thick, but not overly sweet. 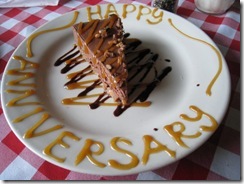 Overall would I go back? I would and I’ll try their pizza next time since that’s what they are more known for. They offer free delivery with no minimum charge, there’s no email newsletter to sign up for, but doing a quick search online I found there’s a coupon in the Entertainment books if you purchase those.