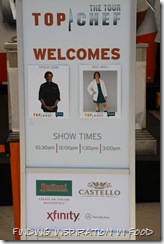 It’s been a busy week I’m so glad it’s Friday!

The Top Chef Tour was in town this Wednesday and I was very excited about attending. I went with my neighbor, my mother in law and my nephew. They limit it to 65 seats which was a nice size group. I just felt bad for them having to cook outside with it so hot. 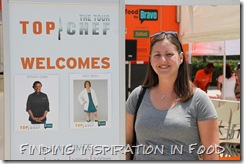 The tent area was nice with a monitor on each side so you could see what they where doing as they where cooking. 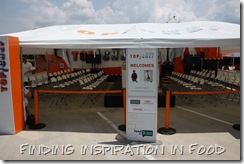 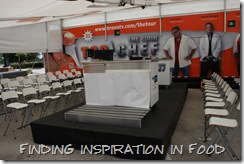 Tiffany and Kelly came out and the host Andy quickly explains that they each had 15 minutes to make a dish using a secret ingredient that was picked via Facebook fans which was beef. They where also given a list of 10 ingredients from which they had to use two ingredients and they where allowed to bring one ingredient of their own from home to cook with. Tiffany chose lettuce and Kelly chose jalapenos. 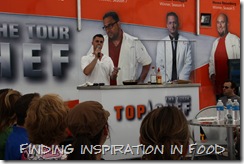 3 judges from the audience where chose to sit in the middle of the stage and vote for which contestant would win. 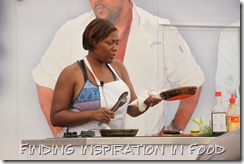 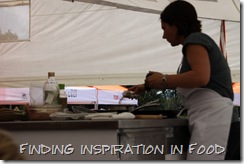 While Tiffany and Kelly made their dishes they opened up questions to the audience. Most questions where not that great, but they did come from kids, like who do you think will win today and what are you making again. I raised my hand and asked what their favorite go to dishes where at home. Kelly answered that she loves anything grilled and really likes to grill vegetables especially. Tiffany likes having fresh homemade pasta and ravioli stashed in the freezer for quick meals and unexpected guest.

Tiffany Derry dish was a Coriander Spiced Skirt Steak to be eaten as a lettuce wrap. I really loved the bold seasoning she had on her meat. 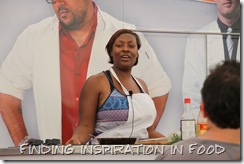 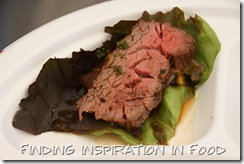 Kelly Liken who also made a marinated skirt steak with pickled vegetables and jalapeno sauce. I enjoyed her dish, but overall preferred the stronger flavors of Tiffany’s. 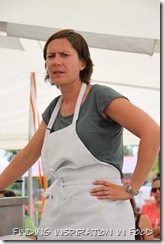 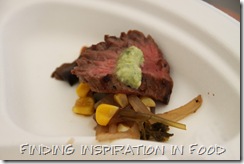 I enjoyed listening to their behind the scenes experiences. Tiffany and Kelly didn’t audition for Top Chef via casting call, they where approached by Top Chef and then went through the interviewing process before getting on the show. The longest day for Tiffany was 26 hours straight when they traveled down Nassau and had to dive for their own conk to cook.  Their days happen pretty much the same as it does on tv. The quick fire challenge happens, they jump in the car to Whole Foods then go to the elimination challenge the only time there’s a break is the traveling time or if the challenge happens the next day they head back to the house. Filming for the judging process seems to take the longest up to 12 hours some days. They mentioned one day where they stood lined up in front of the judges for 3 hours straight and where directed judges look at contestants, contestants look at judges, contestants look at each other.

Then it came for the announcement of who won…..it was Tiffany!!

Overall it was a neat experience despite the heat. We had a chance to get autographs and pictures taken. I’m happy to say that Tiffany and Kelly are just as sweet and bubbly as they are on tv in person. I can’t wait to try their restaurants one day after tasting their great food that had today. 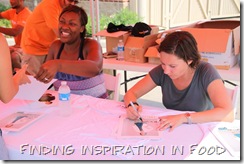 I got my apron signed. 🙂 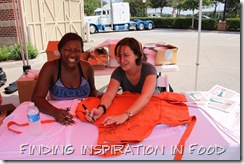 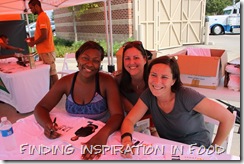 For additional information regarding the tour and recipes be sure to check out www.bravotv.com/top-chef