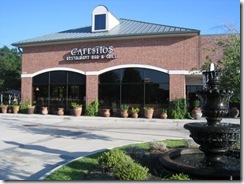 There’s a fairly new place that opened up in Katy called Cafesitos and we got a discounted groupon so we decided to give them a try. Their flyer says to “Experience the ultimate in Spanish cuisine”, but first glance at the menu it’s Spanish dishes and Italian dishes. Don’t get me wrong I like variety, but it was a little odd like they where confused about which direction to go. I liked the layout of the restaurant. We where seated by a kid who didn’t look any older than 12 in a suit. I wasn’t sure if he worked there or he was a eating there and playing around seating people.

We where greeted by our waitress who was really nice. She was attentive, until towards the end of the meal we couldn’t find her and she forgot to give us our leftovers (partly my fault because I didn’t remember until I got home). The had given us small loaf of bread and some parsley butter. I thought it was good and fresh just wished they gave you more bread. 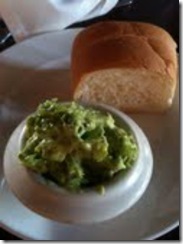 To start we wanted to try the Calamares a la Romana $6.95 (Crispy seasoned calamari served with marinara and romesco sauce). I loved the breading on the calamari and the romesco sauce was fantastic, my problem was I wished there was more for what you’re paying for. 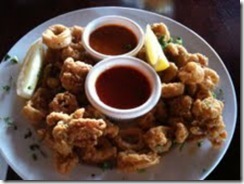 We ordered the Fajitas Kohly $10.95 (Slice seasoned beef, chicken, and shrimp , topped with green and red peppers, served with white rice, black beans and green plantains) The beef was chewy, the chicken was the best as well as the fried shrimp. The fried plantains where not good at all, but the beans where fantastic. When I think of fajitas, I think of tortillas, but you don’t get that you just get a plate of meat. Wouldn’t order this again I don’t think it was worth it. 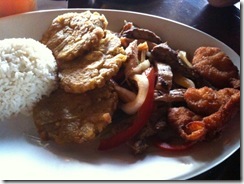 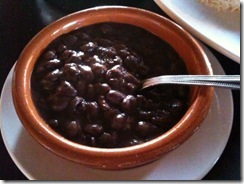 We also ordered the Paella Marinera $18.95 I thought it was really good and seasoned well, just a little pricey. 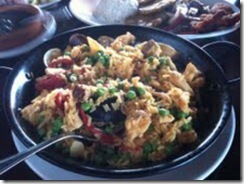 Would I go back? Probably not unless someone wanted to go and I would try one of their other dishes.