Today rain was in the forecast. 🙁 It wasn’t when we where packing on Thursday, but at least we packed a travel umbrella just in case! We had to re-arrange our game plan for the weekend and decided to visit the Shedd Aquarium and The Field Museum. I honestly was dreading going, because it was a Saturday and it was raining which meant everyone was going to be there. We grabbed a quick breakfast at Dunkin Donuts before a quick cab ride to Shedd Aquarium to be one of the first people in. 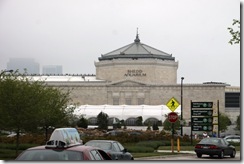 Just as I had thought we weren’t the only people with the bright idea to go early. 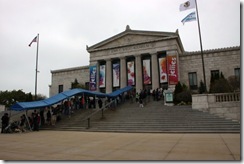 I took a few quick pictures of the overcast city while we waited. 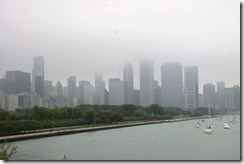 The aquarium was nicely done and a great layout. It cost us $69.90 for tickets to enter, tickets to the show, entry to the Jellies exhibit and tickets to a movie of our choice. More details on all that stuff later. I took a lot of pictures that day so I’ll just post a few of my favorites. The first picture is of an area by the shark tank where you can walk over a clear glass and watch the stingrays.

Ok the show experience was one I would skip next time. They tell you about their training methods which was neat, but the show the Pacific White Sided Dolphins do is only a couple of tricks. Then they walk out this hawk named Echo and tell you how they get it used to people and reward him by feeding him treats and walk back off stage. I kept waiting for it to fly over the audience, but that didn’t happen. The show is short so it doesn’t take up a lot of time, but I would rather walk around while everyone is at the show.

The other part I could have done without is the movie. You choose one of the three (we went with Planet Earth), which all are around 12-15 ,minutes long. It’s 4D so it’s cool that they move your seat, blow wind and bubbles, etc. 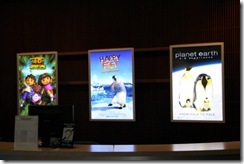 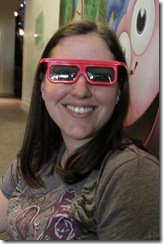 By the time we left the aquarium it was lunch time and the line to get in the aquarium was HUGE. I recommend going when they open otherwise find another activity for the day.

We wanted to try the “Chicago style” dog so lucky for us there was a cart outside the Field Museum. If there’s not a flag or sign with a V on it, it doesn’t have the right meat to call it a true Chicago hot dog.

Since I’m not a fan of most of the topping on the Chicago Dog I opted for the polish dog and D got the Chicago one. I tried a bite, it just seemed like too much stuff on a hot dog, but the polish one was good, reminded me of a sausage on a stick. 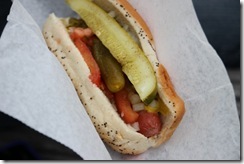 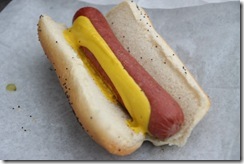 We ate on the benches near the Field Museum before heading in. Wow was this place huge when you walk in! We got our tickets at a discounted rate for students $18 (never throw out an old college id!) reg $22 for adults, the package was called a discovery pass which included an entry into one of their exhibits whales, horses or 3d film. We picked the whales exhibit and went on in. 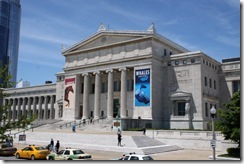 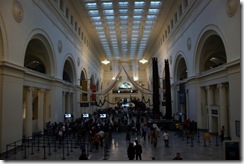 I thought it was a neat place with tons of things to look at, you really need all day to see everything here.

After hours of walked we caught a cab to the hotel to take a quick nap while it was raining then headed out to dinner at Giordano’s. 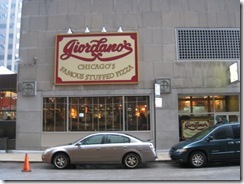 Ordering a deep dish pizza takes 45 minutes to bake so D tried out a couple different local beers while we waited for our medium pepperoni and sausage pizza. We ate in the bar area where the service was very poor. D got up to refill our waters and order drinks at the bar. The waiters pop up when you get there and when it’s time to pay otherwise they hide somewhere. 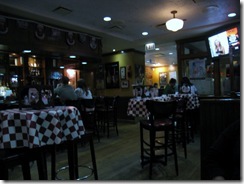 The pizza finally came and we ate up every bite after starving from all the walking we did today. 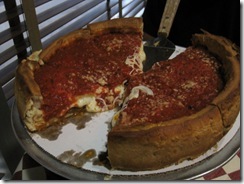 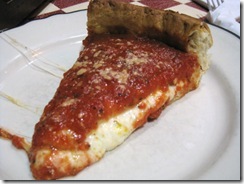 We thought the crust was a little dry, but wasn’t sure if it’s just this place or that’s how they are so we decided to try another place while we where here. I liked that they put the meats on the bottom so they don’t slide off with the cheese and sauce. Of course I love cheese and there was plenty on here so I was happy. We just weren’t fans of the crust.