Today we ventured around the town of Taos and stopped at the local grocery stores to stock up on supplies.

For all of you Whole Foods and Central Market shoppers you’ll be pleased to see a store that is very similar to it. Not as big of a selection, but filled with organic items. 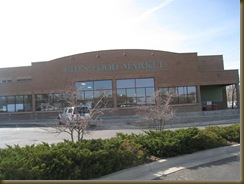 There’s also  a Smith’s which Kroger owns, a Walmart and Albertson’s. There’s more stores to shop at then I had thought. Another nice feature is that the grocery stores also sell liquor, if only ours did back home that would be one less stop I would have to make when shopping. 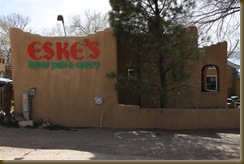 We stopped for lunch at the local brewery Eske’s. BTW they open at 11am, that’s not listed on the site. We ordered a flight of beer to taste all the flavors they had on tap. ($1.50 per tasting) 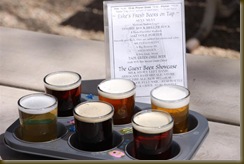 I had read many reviews online talking about how good The Fatty and Cheese Burger where so we ordered one of each. We sat out side in the “garden” since the weather was so nice. They even have a sand area for the kids. 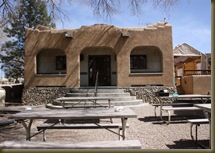 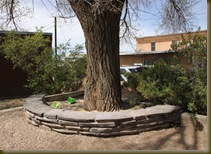 The Fatty $8.75 (A whole wheat tortilla filled with beans, homemade mashed potatoes, onions, feta cheese, and cheddar cheese all smothered in Wanda’s Green Chile Turkey Stew.) Oh wow, this is a filling dish and even though you’re full you’ll keep going back for more! 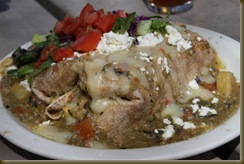 Cheese Burger $6.75 (A lean ground beef patty topped with cheddar cheese is served on a whole wheat bun with mayonnaise, a lettuce and tomato and pickle garnish, and corn chips with salsa.) We ordered the addition of New Mexico Green Chiles for a total of $7.25, because where where after all in New Mexico for the chilies and food! The waitress told us that they just switched over to grass fed beef without upping the cost and you could tell a difference in the flavor. I admire how the restaurants here value organic and more natural ingredients. 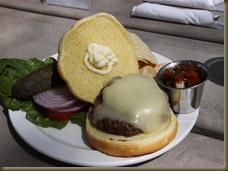 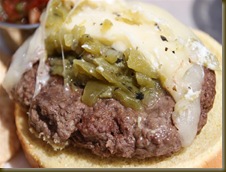 As for the beer I settled with the Sexy Mexy a Mexican Amber Lager and D went with the Doobie Rock Heller Bock. 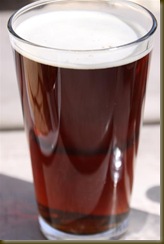 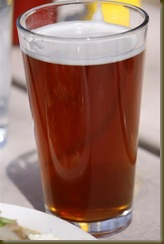 Does anyone know what kind of tree this is? I really like how it blooms! 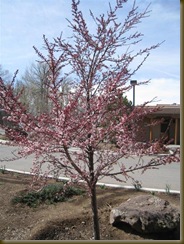 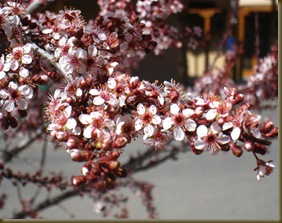 D set up his computer and got everything lined up and working so he could work during the week. Then we headed out to the Rio Grande Gorge Bridge. 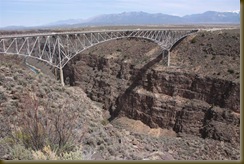 Located 10 miles outside of town this is a must see place! Walking across a bridge that’s 650 feet above the Rio Grande just makes you say wow. It’s the 5th highest bridge in the United States and another fun fact is you have seen this bridge in films, including Natural Born Killers, Twins, She’s Having a Baby, Wild Hogs and Terminator Salvation. 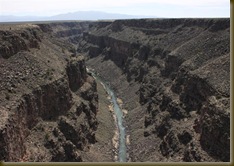 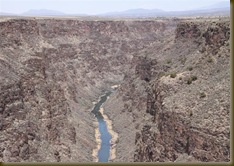 After spending time at the bridge we headed up to Taos Ski Valley. There’s not much to see up there because the ski season closed 2 weeks ago, but we didn’t care we wanted to see snow! 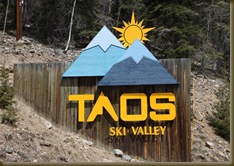 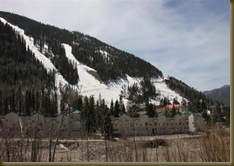 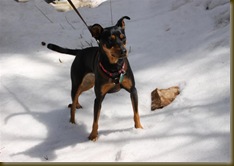 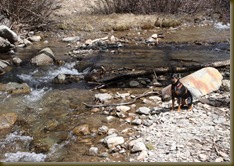 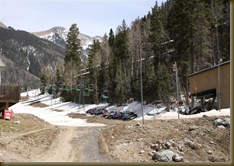 For dinner we headed back into town to eat at Orlando’s which is voted best Mexican Food in Taos County since 2005. We had high hopes for this going in. 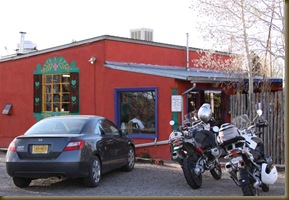 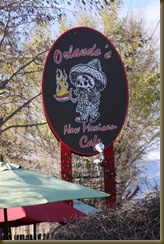 We started out with cocktails ordering a Sangria on the rocks $5.50 and Mike-arita $5.50. Both where ok nothing to wow about. For the entrees we went with the La Reina $9.75 (One rolled blue corn cheese and onion enchilada with choice of chile, two pork medallions topped with chile caribe. Served with beans, posole and a flour tortilla.) I chose the green chile on the enchilada since the pork medallions came with the red sauce. The pork was really good, but if you don’t handle spice very well then don’t order this. I loved the heat, but boy does it light you up! The enchilada was like any other I had, loaded with lots of cheese. 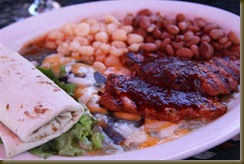 We also ordered the Combination Plate $9.95 (One rolled cheese and onion enchilada, one soft shell chicken or beef taco and your choice of tamale or chile relleno. Served with beans and posole.) We picked the beef taco and chile relleno. The dish was just ok. The relleno was stuffed with cheese and wasn’t that much bigger then a stuffed fried jalapeno I make at home. I would order something different next time. 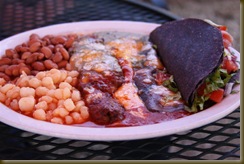 We finished up our evening in the hot tub watching the sun set. Ahhh what a great day. 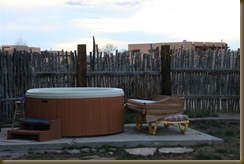