I watch a lot of cooking shows and was excited to see one of the contestants had a restaurant in Houston and knew I had to try it out. Chef Bryan Caswell from Next Iron Chef owns Reef and Stella Sola in Houston. I’ve heard fantastic things about Stella Sola and mixed reviews about Reef. We happened to be going down town for a charity event so we popped in Reef for an early dinner. 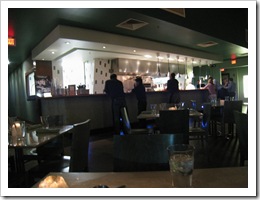 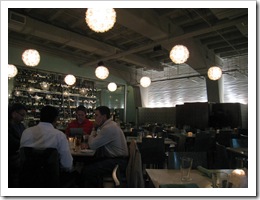 The restaurant had a nice look to it, very simple and clean. They where hosting a Christmas party in the wine room, but other then us there where 2 tables filled at 6:30pm. I got the feeling the dress code was business casual and that was fine with me. The only thing that bothered me was all the waiters hanging out at the pass. I know what’s where they need to pick up their food for the tables, but when there’s no one there they shouldn’t huddle there.

I really like that they had homemade sea salt rolls and jalapeno jelly at the table. The bread reminded me of a pretzel and the jelly had enough sweet to it to balance out the heat. I also never understand why they give you 3 rolls for 2 people. Yes things look better in odd amounts but come on I want my own roll! 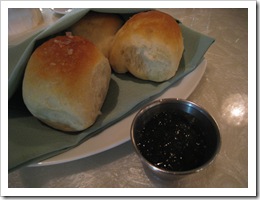 As an appetizer we ordered the Crunchy Calamari, Charred Green Tomatoes, Cilantro Aioli, Pickled Pepper Condiment $9. The sauces where awesome I just wish we had more calamari for the amount of aioli we had. 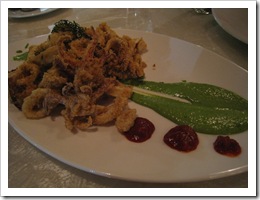 As my entrée I ordered the Crispy Skin Snapper, Sweet and Sour Chard, Tomato Brown Butter &26. The snapper was bland, cooked well but very bland. I think the chard could have been cooked a hair longer. The thing that had all the flavor was the broth. Wow if only the fish could have taken on some of that flavor. 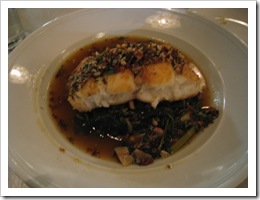 D ordered the Redfish on the Half-Shell, Fried Mac & Cheese $26. Let’s see what can I say about this dish….ummm well that’s a huge block of fried mac and cheese. His whole plate was bland and the fish stuck to the skin so bad it looked like he butchered the thing. The sauce on the fish was really good that was about it. 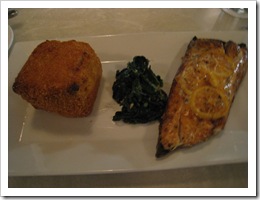 Overall maybe we had a bad night there, but I wouldn’t go back. I’ll be trying his other restaurant and pray it’s better.