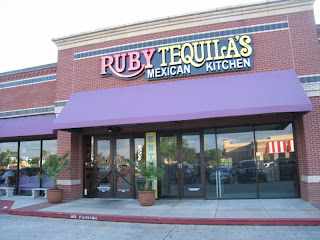 We tried out a new place with some friends that had been here before. Ruby Tequela’s has several locations in Houston, Lubbock and Amarillo. Walking into the restaurant had a very open feel and lots of seating. The waitstaff is nice and there’s plenty of them around so they don’t have a lot of tables to work. We started off with a margarita. CARLOS SANTARITA – Sauza Tres Generaciones Plata, Patron Citrónge and Blue Curacao. They where tasty but not as strong as a regular one would be. 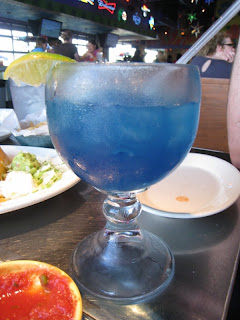 Since there was a group of us we where told the appetizer sampler was plenty of food. RUBY’S SAMPLER PLATTER $14.95 2 beef flautas, 2 chicken flautas, 2 chicken empanadas, taco meat nachos, cheese quesadillas and grilled fajita steak. Served with guacamole, sour cream, queso and creamy jalapeño dip. The creamy jalapeno dip is REALLY good! If anything you need to ask for this with your chips and salsa they don’t charge extra for it, but you have to ask or they won’t bring it. 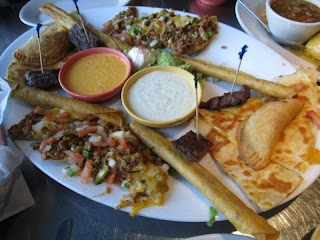 The platter was plenty of food, but since D and I had never been there we also ordered the SUNSET FAJITA BURRITO $11.95 Grilled beef, chicken or combination fajita wrapped in a flour tortilla smothered in our queso inferno. Served with guacamole and sour cream. This was a disappointment and I wouldn’t order it again. The burrito looks huge but there’s maybe a 1/4 cup of tiny chopped fajita meat inside and nothing else. 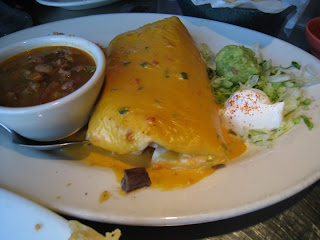 Overall I would go back, but I’ll stay away from the burrito. There’s a coupon on their website so be sure to print that before you go.