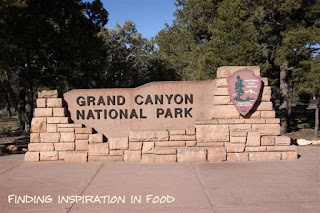 As glad as I am to be home in my own bed and to see my sweet puppy again I really miss being at the Grand Canyon. We had an amazing trip and even though it was short it was action packed. This post is all about our trip and then if I make it to the grocery store tonight I’ll be back to more recipes later this week.
We flew into Phoenix, Arizona on Thursday, April 9th and got there right around lunch time. My husband found a local brewery called Four Peaks in Tempe, Arizona, so we decided to check them out and have lunch there before we drove to the Grand Canyon. We started out with the sampler of the beers they offered as well as Arizona Chicken Rolls. The rolls were ok they tasted like a pot pie rolled up to me, but the jalapeno dressing was good. 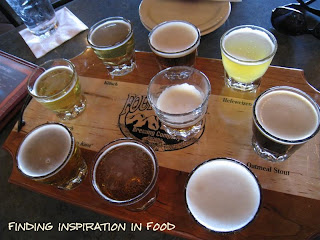 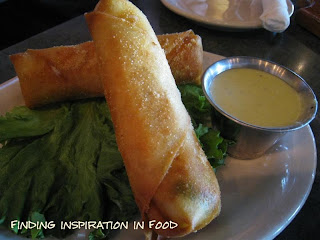 We each ordered a pizza (which was way too much food, but we took the leftovers to have that night). I got the Mediterranean White Pizza which was garlic and oil crust topped with chicken breast, spinach, dill, feta, ricotta cheese and pine nuts. The hubby opted for the Classic Italiano which was Italian sausage, pepperoni, sun dried tomato, red and green pepper with marinara sauce, mozzarella, Parmesan and Romano cheese. To be honest all I saw as tons of green peppers covering the rest of the ingredients. 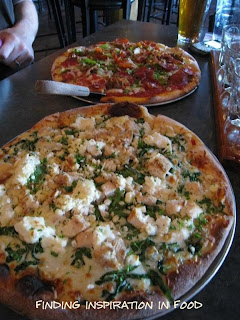 Over all the food was good and the beer was ok nothing I would special order except I really liked the Arizona Peach Ale. I know it sounds weird, but it was a light peach flavor and tasted great to me.

With a full belly we set off on our 3 hour drive where we arrived at the Maswik Lodge to check in before heading to the rim to get some sunset pictures. 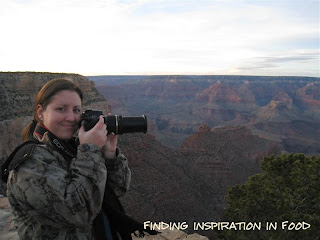 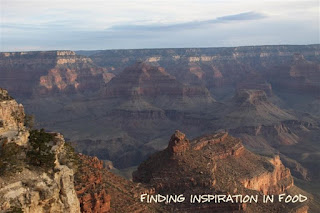 Friday morning we woke up early to check in for the mule ride to the bottom of the canyon (10.5 miles down) at 7am. We signed up for the overnight trip and I’m glad we did because we were able to see the canyon from all angles. We were each given “luggage” which was the size of a 10 pound ice bag, a one of a kind water cantine and a rain slicker so they knew who was on the mule ride. 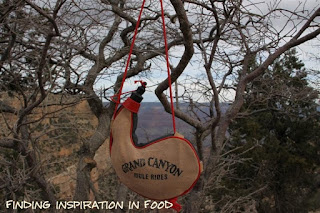 We were broken up into 2 groups the day riders and the overnighters and then the overnighters were broken down into 2 more smaller groups. Our group had a 2 sisters about our age, a woman who was turning 50 and decided to do this for her birthday, a couple from New York, an older Canadian rancher and my husband and I. We set off at about 8:15am and for the first 5 minutes I swear I had my eyes closed. Being on a large mule who walks near the edge of a narrow path with a drop off kind of freaks you out. After that first 5 minutes I was fine it’s like being on a roller coaster, you know you’re not gonna fall out but it’s still scary. 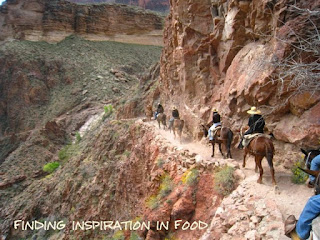 The views are amazing! We took short breaks to rest the mules, take a few photos and drink some water then we were off again. We only got off once where we had a 20 minute lunch break. 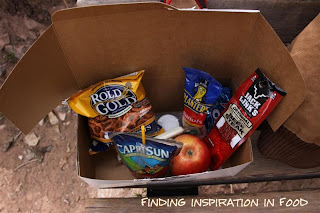 The weather was cool in the morning then got to t-shirt weather by the afternoon. Seeing the Colorado River was breath taking as well and there’s a really nice cool breeze coming off the water. Then we had to go through a short tunnel and cross a bridge to get to the other side where we made it to the Phantom Ranch around 12:15pm. The rest of the afternoon we could do what we wanted. The hubby and I hiked a little and walked back down to the Colorado River to get a couple up close pictures. Dinner was at 6:30pm and boy did they fill us up! 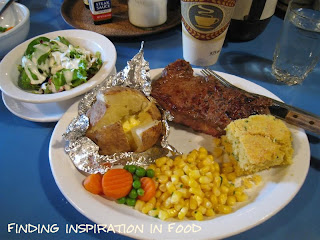 We met Pete and Pete who where hikers and wonderful company. It’s nice to meet other people who love to travel and compare where all you’ve been and want to go. I hope we didn’t talk their ears off. 🙂 (Pete if you stopped by send me an email at crazystar32@hotmail.com and I’ll get you those other links to the pictures like I promised.) After dinner the sun started going down and while walking back to our cabin we saw 4 deer right out back. 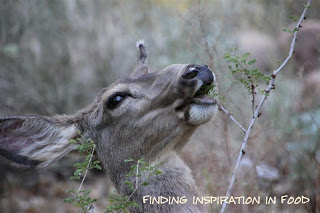 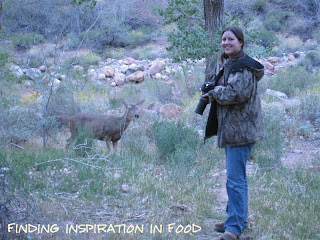 Saturday, our morning started at 6:30am where we ate breakfast. Sorry no picture I was still waking up. Pancakes, eggs, bacon, orange juice, coffee and tea is what they had. Then we set off again at 7am back to the top of the canyon (7.3 miles to the top). Today’s weather was a little more overcast and they said it was snowing/raining at the top so we weren’t sure what we would be in for. The climb was more steep and we stopped more then we did the day before to rest the mules. By the time we made it to the bathroom stop the clouds came really thick. We all put on our slickers and it started to snow lightly. I was excited for many reasons, #1 we don’t get snow in Texas #2 we were excited because they weren’t sure if we were gonna see snow or just get the rain #3 it’s just cool because we never see snow! And it was cool until it started coming down super hard stinging my face and making my gloves and jeans soaking wet! The last 45 minutes it snowed on us and it was down right miserable. 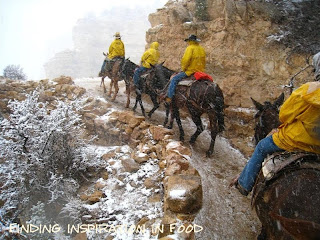 We had to catch up to the other overnighters ahead of us because their leader was in trouble. Later we found out he lost feeling, couldn’t walk and was dizzy and taken away in an ambulance. Other then the last 45 minutes of the mule ride I would so do it again in a heart beat. That night we staying in the El Tovar (which is featured in the National Lampoons Vacation). We swapped our snow soaked clothing for dry ones and headed back out to get some snow pictures. 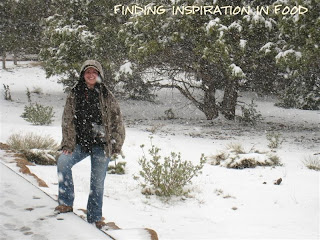 It was nice to take a long hot shower and warm up before heading to dinner downstairs that night. We headed down a little too early so headed to the cocktail lounge where we ran into Pete and Pete again. We had a nice visit again and then they headed back to catch an early flight home and we headed to dinner. We started out with Black Bean and Tortilla Soup and Buffalo Carpaccio on Roasted Poblano Crostini served with a Jalapeno Bell Pepper Marmalade and toasted Pine Nuts. 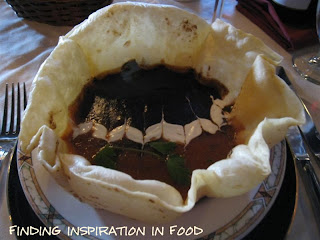 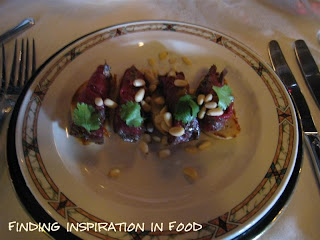 For the main course we had the Crab Stuffed Idaho Rainbow Trout with a Lemon Beurre Blanc and Rice Pilaf and NY Strip, Buttermilk Cornmeal Onion Rings and Pepper jack Au Gratin Potato Cake. The meal was very good except the fish dish it tasted like a frozen dinner and the only good part was the crab stuffing. 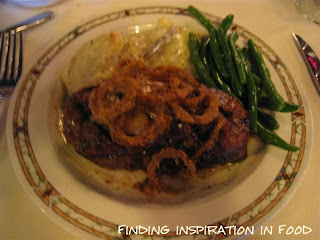 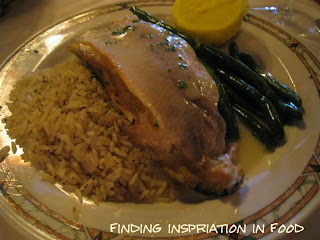 The rest of the night it seemed to pour snow on us and we ducked in and out taking pictures then headed to bed early.
Sunday we had a 12:11pm flight which meant we were up early again for the 3 hour drive back. We did head out to Mather point to check out the views since the skies were clearing and the sun was coming up. 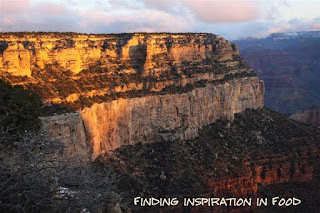 I was glad to have gotten to see the Grand Canyon in what seemed like all the seasons. The snow was melting and got our final pictures before making the drive back. Our flight landed 20 minutes early so it was a good trip back home.
In all we took 1178 pictures and if you’re interested in checking them out (or skimming them) I’ve got it narrowed down best I could. Check them out on my photo storage site – http://allisonloesch.photoreflect.com/ click on Grand Canyon and the password is arizona. Remembr if you want any just let me know and I’ll email them to you don’t buy any off the site I just use it to show pictures.