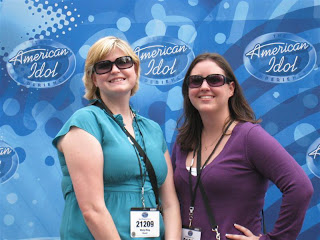 It’s great to be back home, but over all we had a blast on the trip! It was top notch all the way and we were very well taken care of. We stayed at the Wilderness Lodge at Disney and were given a 3 day park hopper pass. The day of the American Idol event we were walking around and ran into Sanjia and Melinda Doolittle. Truth be told when I saw Sanjia I had no idea who he was but saw people walking toward him and he had a person in a suite walking around with him so I figured he was someone. After we walked away it dawned on me who he was.
We meet up with our group and they moved us to a VIP area with Access Hollywood. It was so neat to have the cars stop 3 feet away from you while they did their interview. We then relocated to the American Idol event where they did a show and afterwards David Cook and Carrie Underwood sang. (You can see it on you tube if you look it up just search for “Disney American Idol”.) All of the past winners came on stage and they had a presentation. Then we got escorted to a private dinner where Josh Gracin and Bucky Covington walked in. You’ll see some goofy pictures of us, but we had to do something to stand out and see if they would actually do it and they passed. Yes they really are putting lip gloss on us! Poor guys probably thought we were nuts, but when Josh got all excited and said “I have 4 sisters I got this down” I knew he was serious. Bucky posed while Josh lathered it on. They were both so nice and down to earth. As for dinner they had a really nice spread of mahi mahi, chicken, pot roast, veggies, salad you name it.
We had perfect weather while we were there and covered a lot of ground riding all the rides we could. Friday we spent riding the last few rides we wanted to and while walking around found Ryan Seacrest filming for E. If you see it on tv then you’ll see us in the back ground. We didn’t get an autograph from him but we were a foot away from him when he walked out to the crowd.
Friday night the husbands flew in and we ate at Emerils restaurant at Universal then checked out their 2 parks Saturday and Sunday.
Here’s the pictures from our trip – http://allisonloesch.photoreflect.com/ click on American Idol Experience
Other then trying to recover from a cold I have I should be back in the swing of things this week. Many thanks again for everyone who was involved in hosting us as well as the folks over at 104.1 KRBE for hosting the contest!!! The trip was truly magical! 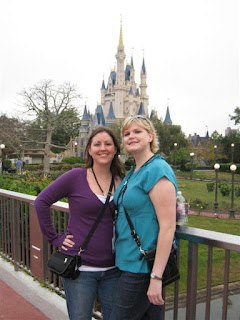