A peak into my Christmas gift baskets…. 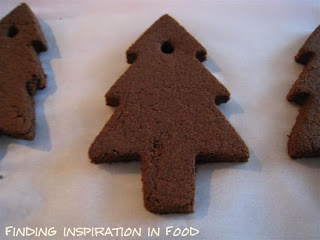 With the crowds seeming to multiply out at the stores I find myself hating to shop. Online shopping is my first choice when the holidays roll around, but I have found the past couple of years I would rather give home-made gifts rather then stress out about what to buy. I find my family and friends appreciate food more then something they’ll never use. That brings me to today’s post, a friend of mine shared a recipe with me for a Christmas Ornament that smells delish. My house smells like I’ve been baking all day and I love that I don’t have to light a candle or deal with the messy potpourri. This is a great recipes to get the kids involved in and makes a great memory.
I do have a confession….in the rush of not wanting to measure I kind of messed up a little. I know you can’t tell, but I could tell as I was rolling out the dough it wasn’t very dough like it crumbled on me. I was happy in the end that they held together it just took longer and almost a whole bottle of glue! What happened was the recipe calls for 4 ounces of cinnamon and the containers I bought where 2.37 ounces I figure I could guess the 4 ounces. Long story short lesson learned and I’ll do the right thing and measure next time! No more shortcuts.
Cinnamon Christmas Ornaments
4 ounces ground cinnamon
1 tablespoon cloves
1 tablespoon nutmeg
2 tablespoons white school glue
3/4 cup applesauce
Any spices can be used if you don’t like one just substitute it out. Combine all of the spices in a bowl, mix together. Add applesauce and glue. Work with hands until smooth. Mixture will be like wet dough, and if it’s too wet then add some more spice. Roll out to a 1/4 inch thickness. cut with ornaments. Cut a hole in the upper edge with a drinking straw so it can be hung. Place on a rack to air dry for several days (3 or 4 days), turning until dry. 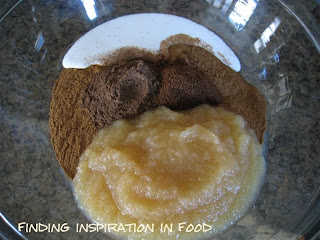 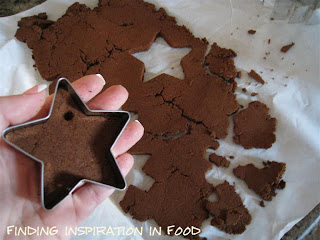 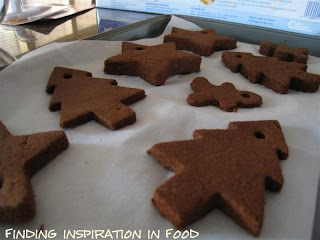 I tried out different thicknesses to see what works best. I think the 1/2 inch works best for me, but it also depends on how many of these you want to make.

**Remember not to eat them!
I will use them as gift toppers and also in gift baskets I’m giving out this year. All the ornaments you see on the tray is what the dough made. The star and Christmas tree are about the same size and the little gingerbread man is about 2 inches big. I started making less gingerbread because something just didn’t look right with a big hole in his head. 🙂
I’ll have more pictures later as I post other items going in my gift baskets.