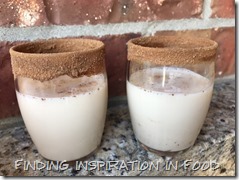 I love the Cinnamon Toast Crunch cereal, so this is right up my alley. I also feel like it’s semi-healthier lol. Overall super yummy and I would love to serve this at a party on day.

Rim two shot glasses with the cinnamon & sugar mixture. In a shaker, add ice and all of the ingredients above. Shake and strain into the shot glasses.