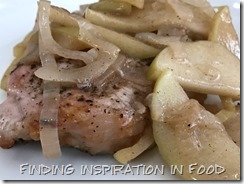 Hurricane for the season….check. Now it’s time to shift weather seasons and start bringing in some cooler Fall weather! Ok I’m in Texas and that’s probably wishful thinking anytime soon, so until then I’ll just cook like it’s Fall.

a sprinkle salt and pepper

Heat the vegetable oil in a heavy skillet over medium-high heat. While the skillet is heating, open the pork chops and season one side with salt and freshly ground black pepper.

Once the oil is hot (it should look wavy or rippled) place the chops in the pan, seasoned side down. Season the other side and let the chops cook undisturbed for 5-7 minutes or until the bottoms form a nice brown crust. If your chops are sticking to the pan, that means they have not formed a crust yet. They will “let go” once the crust forms. Flip the chops and cook the second side in the same manner. It should take 5-7 minutes for each side. (We grilled ours.) 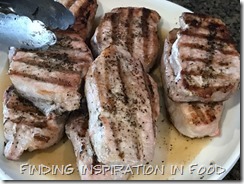 While the chops are seared, thinly slice the onion. Wash, core and slice the apples into thin wedges. Once the chops have seared on both sides, remove them from the pan and add the apples, onion and butter. Stir and cook for about five minutes or until the apples and onions begin to soften. 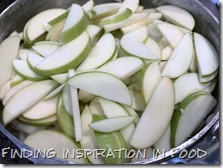 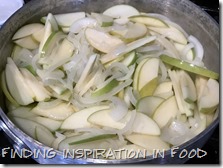 Add the bouillon, water, brown sugar, cinnamon and nutmeg to the skillet with the apples and onions. 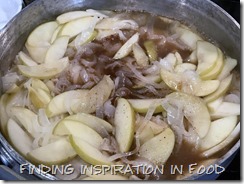 Stir until everything is mixed together then return the chops to the pan. Nestle the chops down in the mixture, making sure some onions and apples are on top of the chops. 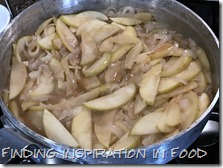 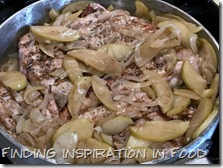 Simmer the chops in the apple/onion mixture for about 10-15 minutes or until the liquid has reduced by half. Stir occasionally, moving the apples and onions around so they all have a chance to simmer and soften. Serve each chop with apples, onions and sauce spooned over top. 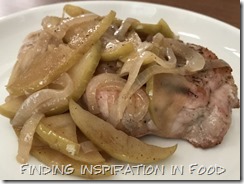