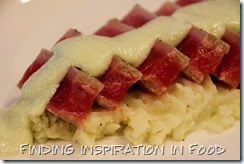 I love making seared tuna, because it’s an easy weeknight dish that doesn’t take long to prepare. This time I tried a wasabi cream sauce which is good , but we had to add more wasabi to get the flavor and heat we wanted. I also added in some wasabi powder to the mashed potatoes which gave them a good kick with the dish.

* If you don’t have wasabi powder, use ~ 2 Tbsp prepared wasabi, omitting the water.

In a spice grinder or with a mortar & pestle, grind peppercorns, sesame seeds, and salt together until it becomes a relatively fine powder. Spread mixture on a plate.

In a saucepan (NOT over heat!), whisk together wasabi powder and water until smooth, allow to sit for 5 minutes. 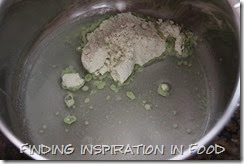 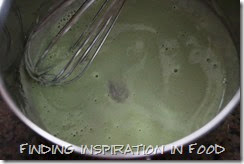 When 5 minutes have passed, whisk in rice vinegar, soy sauce, and heavy cream. Turn burner heat on to medium, heat sauce just to a simmer. Allow to simmer gently for 5 minutes, as you prepare the tuna steaks. 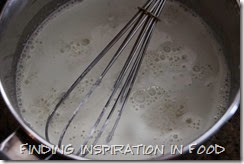 Slice tuna steaks, fan them out, and serve with wasabi cream sauce. 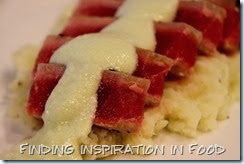