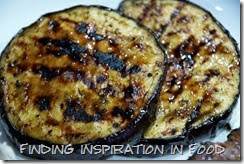 My hubby isn’t a huge fan of eggplant so I’m trying to find a way to make him like it. I remember growing up the only way I ate it was when my dad would fry it and we poured a cheese sauce on it. I’m still a little picky depending on how it’s cooked, but I do enjoy it grilled. Of course when you add a lot of flavor to it it takes the strange texture he doesn’t care for away from it.

We both (and my son) really liked this version so it’ll stay on the top of my recipe book for now when I’m craving eggplant. A bonus is they don’t take long to cook on the grill so by the time you’re done the steaks are done resting and dinner is served!

1 eggplant (2 if using small Italian ones)

*aleppo chili is a middle eastern seasoning that isn’t spicy but sweet & musky. You can substitute this with smoky paprika or regular or just omit it altogether. I only had regular paprika on hand that I used. But I’d like to try the smoky kind as I think it would go well.

Slice eggplant in 1/2" slices. I left the skin on as it contains a powerful antioxidant nasunin that is good for you. Because of the way it’s cooked, I didn’t find it to be tough or chewy at all. Lay out paper towels and place your eggplant slices on it and generously sprinkle both sides with salt. This will help the eggplant release a lot of it’s moisture so it’s not soggy after being cooked as well as removing any bitterness if there is any. 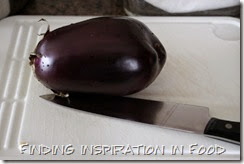 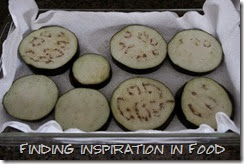 In the meantime, mix all the ingredients above in a bowl. After letting the eggplant sit about 15 min, dry it off. Then dip the eggplant fully in the marinade (or brush both sides with it). 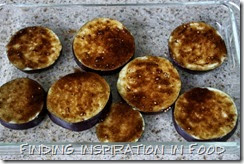 On a preheated grill, take a piece of paper towel with some oil on it and using your tongs brush the grill grates with the oiled paper towel to prevent the eggplant from sticking. (never ever use a spray can of Pam to do this, highly combustible, just saying in case you wondered why I say to use an oiled paper towel.)

Grill over medium heat about 6 minutes or until browned a bit then flip. If you have any leftover marinade, use this to baste the slices. Grill until the other side is browned, watching your heat so you don’t burn it. 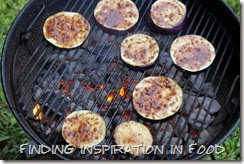 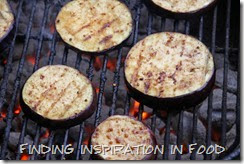 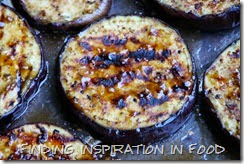 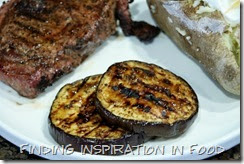