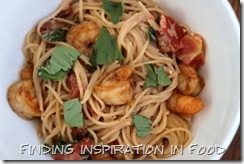 I really enjoyed the flavors of this dish. We ended up grilling the shrimp to add a little more flavor instead of cooking them in the sauce. Either way is fine, but I prefer the added grilled flavor. Overall this is a simple dish and easy to make ahead of time.

Bring a large pot of salted water to a boil over high heat. Add the pasta and cook until tender but still firm to the bite, stirring occasionally, 10 to 12 minutes. Drain and transfer to a large serving bowl.

While the pasta is cooking, put the bacon in a large skillet. Turn on the heat to medium high and cook, stirring frequently, until the bacon is brown and crispy, about 10 minutes. Using a slotted spoon, remove the bacon and set aside. 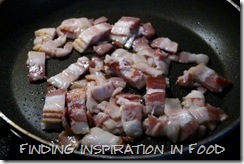 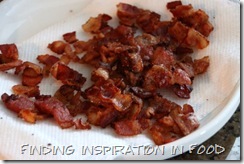 In the same skillet, add the garlic and cook until aromatic, about 30 seconds. 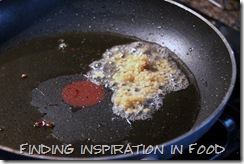 Add the tomatoes with their juice, the cream, clam juice, ½ cup of the basil, 2 teaspoons salt, and ½ teaspoon pepper. 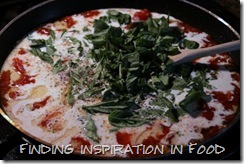 Bring to a boil and scrape up the browned bits that cling to the bottom of the pan with a wooden spoon. Reduce the heat to medium and simmer for 10 minutes, until slightly thickened. 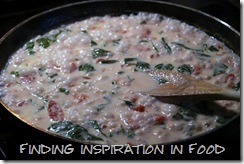 Add the shrimp and cook, stirring occasionally, until just pink throughout and cooked through, about 3 minutes. Add the bacon and simmer until warmed through, 1 to 2 minutes.

Pour the shrimp mixture over the cooked pasta and toss until coated. 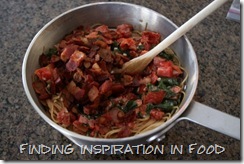 Season to taste with salt and pepper, and garnish with the remaining ½ cup basil. 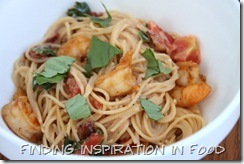 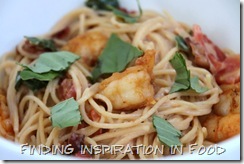